Using Your Rope in the Anchor

It's not uncommon for us to get up to an anchor point only to find that we've left our cordellete on our partner's harness or to find that it is impossible to hear. Most people will just deal with these problems without thinking outside-the-box. One outside the box thought though is to use your rope for these things. 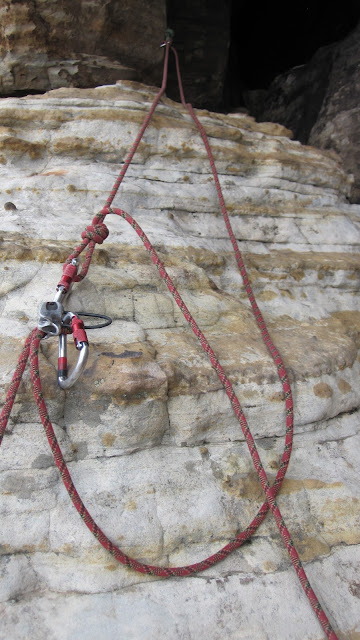 This first photo was taken in Red Rock Canyon at the start of the "Tunnel Pitch" on Tunnel Vision (III, 5.7). If you're not familiar with this route, it is an absolutely stellar ascent. On the fourth pitch, one has the opportunity to actually climb through the mountain in a tunnel. In other words, the route requires a bit of vertical spelunking.

The top of the third pitch, at the start of the tunnel, it is difficult to see or hear the second. The route follows a corner and chimney system up the wall. In order to see my climber, I built an anchor and then, using the rope, extended the anchor to the edge where it was far less difficult to see and hear.

Some might argue that this system lacks redundancy. I'm not too worried about that as I can see the whole anchor to ensure that there is no rubbing and we never have redundancy in the rope while we're climbing with a single line... 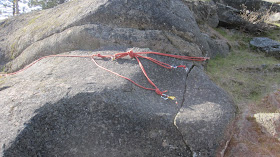 This second picture was taken in Leavenworth, Washington on one of ourAMGA Single Pitch Instructor courses. The assignment was for the student to create a fixed line across a catwalk on the slab shown. This particular student didn't have the webbing or the cordellete to create a perfect SRENE anchor. Instead, he built a pre-equalized anchor with his rope. In this application, this worked really well. 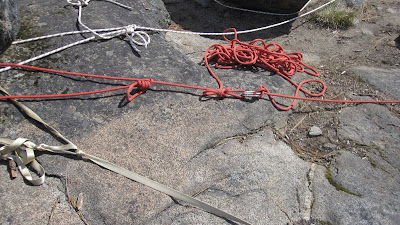 In this picture, another Single Pitch Instructor candidate built a top-rope anchor, wrapping a rope around a boulder and tying it off with a double-bowline. In order to create some flexibility in the anchor he tied an figure-eight on a bite and clove-hitched it to the line going to the edge of his top-rope anchor. 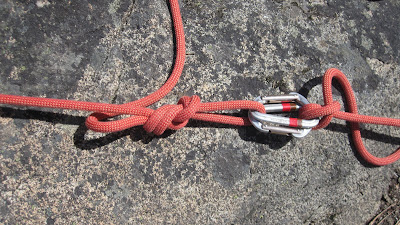 This last picture shows a close-up of the figure-eight and the clove-hitch mentioned above.

Flexibility and thinking outside the box are two major tenants of climbing efficiency. One way to be efficient and to be flexible and to be outside-the-box is to use your rope for anchoring instead of other materials. Your rope is always on you and as such, it definitely provides an option that really shouldn't feel like it's that far out-of-the-box...