Water is a powerful and amazing thing.  Back in the early 1900's the little Norwegian town of Rjukan harnessed this power and built the first hydroelectric powerplant in Norway.  Since then, it has gone through a series of highs and lows, and now it has emerged as an amazing destination for ice climbing.

A 30 minute tram ride takes you from Baguettes and Cafes to some of the most technically challenging terrain out there.  It's no wonder why some of the top alpinists in the world call Chamonix their second (or even first) home.

Gaining precision through persistence.  Breaking your project into a series of smaller attainable victories.  Overcoming the improbable.  All of this is part of honing your craft and good advice to apply to not just your climbing, but the rest of your life as well.

Rumor has it that this term was initially coined by an east coast guide. As I am unable to independently verify the truth of this, I'm going to keep his name out of this blog. In any case, the preceding acronym stands for:

John Long's How to Rock Climb series added an element to the acronym. In his books he began to use SRENE. The RENE part remained the same, but he added the "S". This stood for "secure" or "strong." In other words, are all the pieces strong and secure?

The 2008 AMGA Single Pitch Instructor manual added another letter to the acronym. In this recent publication they made the acronym, SERENE. The new "E" stood for "effective;" as in, was the construction of this anchor quick? Was it well-placed? Does it do the job without too much equipment or fuss?

Popular books like Freedom of the Hills, Rock Climbing: Mastering the Basic Skills, and Alpine Climbing: Techniques to Take You Higherhave gone a completely different route. Instead of SERENE, they use ERNEST.

The only real addition to this particular acronym is the "T" for "timely" which could well equate to the "E" for "effective."

When all is said and done, it doesn't really matter which acronym you prefer. It doesn't matter as long as your anchors are RENE, SRENE, SERENE and ERNEST...

Our first video this weekend was made not so long ago, in a ski town not so far, far away...  It's Mt. Bachelor Strikes Back!!

Maybe if you were a good boy or girl this year, you'll get some Legos for Christmas and can make your own sweet Lego snowboarding video like this one!

And lastly, I couldn't pass up some good ol' Skiing Santa Videos!

Last week we ended "Weekend Warrior" with a soul-stirring, melodically paced, artful ski edit.  This week were starting off with a what-the-heck, holy-cow, those-guys-are-crazy ski edit!

So let's just continue on this same track with another unbelievably crazy line.  If you've seen "Days of My Youth" you're already familiar with this clip.  But for those of you who haven't, prepare to have your mind blown.  In an interview with Outside Magazine, Cody Townsend said he got up to 65 - 70 mph, and the exit of the chute was only about 6' wide.  You'll need to see this to believe it!

This weekend is the Bozeman Ice Fest and the first UIAA World Cup Ice Climbing Event held in the US.  So to celebrate the Fest, I had to have a Hyalite video in here this weekend.  And boy, is this a good one.  Here we see Conrad Anker and Kris Erickson adding a variation to Hyalite Canyon's crown jewel route, Winter Dance.  Their new line, Nutcracker, adds a M7 and a M8 pitch to the start to reach the main ice line.  Not only is this a film about the climbing, but it's also a brief narrative of Conrad and his fallen friend, Alex Lowe, who this new line is a tribute to.


Have a great weekend! - James

How to Be a Skier

The following video is awesome. It will tell you everything you need to know to be a skier. The most important of which is that if anything goes wrong at all, just blame the snowboarders...

Kevin Fogolin's job is to keep people safe. But in order to do that, he has to cause a little destruction now and then. You see, Kevin is an avalanche controller in the Canadian Rockies.  His job is to be out in the snow, to ski, and sometimes he gets to ride in helicopters and drop bombs.  Sounds like a pretty cool gig, eh?  It is, as long as everything goes as planned.  But when things go wrong, they can go really, really wrong...

Dry-tooling is an interesting sport.  You're rock climbing, but using ice tools.  It sounds easy, right?  Well think about it this way:  you no longer have 10 fingers and nice, sticky rubber holding you to the rock, instead you have all your weight balanced on 4 pieces of 3-4 mm thick sharpened steel.  Angelika Rainier is a master of those steel points, and in our next video she shows us how it's done in the first ascent of KamaSutra, one of the hardest dry-tool lines in Italy at D13+ (about 5.13c/d).

Most of the videos I put here are more fast-paced, get-your-heart-pumping, adrenaline-rush type videos.  But every once in a while, I find something that might be a slower-paced on the surface, but stirs something a bit deeper in your soul.


kOnneX : the ski film from Hanno Mackowitz on Vimeo.


Have a great weekend! - James
James Pierson at 6:00 AM No comments:

Book Review: 'The Calling: A Life Rocked by Mountains' by Barry Blanchard 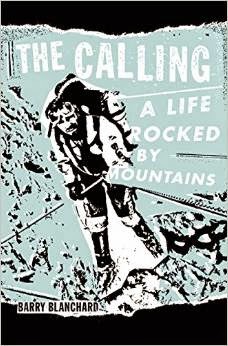 I just finished reading Barry Blanchard's memoirs, which I immensely enjoyed.  For those of you who don't know who Barry is, he is a cutting edge Canadian alpinist who was most active in the 80's and 90's, and most known for establishing some of the proudest alpine lines in the Canadian Rockies, as well as pushing the envelope on high altitude objectives in the Himalaya.  Barry began climbing when rock protection consisted of pitons and chocks, hip belays and home-made webbing harnesses. Free climbing rock beyond 5.8 was yet to be realized.  He was born and raised around Calgary, in an impoverished and violent community, and discovered climbing at a young age.  He harrowingly describes his first rock climbing experience.

'His right hand was frantically sweeping the rock overhead as he strived to find something to hold on to. There was nothing. He clanged through the rack and unclipped an orange knifeblade piton and stabbed it at a crack. The pin rebounded from his grip and clattered down the face, pinging into free fall and a whirring rotation before pinging into the head of my right clavicle. My breath exploded in a wave of white pain.'


This kind of narrative is constantly present, and kept me on the edge of my seat throughout. Blanchard doesn't concern himself too much with trying to find a moral in his climbing, and limits his prose to incredibly descriptive stories of his life, which I have always appreciated.  At times, however, Barry hits you over the head with description, and his use of simile is substantial to say the least.  In most cases, his descriptions create beautiful imagery- pure poetry.

'The last long ribbons of sunlight touched the north face of Alberta: wedding-dress-white ice, abrupt and brutal black rock, and the glowing whit bridal veil of the summit glacier.'


I also learned some new techniques from 'The Calling' that I had never considered, the best example being the "flash-freeze climbing hold", in which you lick your fingertips and place them on an iced-over hold, turning crimps to jugs.  Yeah, when you move past the hold, some skin will be left behind, but greatness such as Blanchard's pays no mind to these minor details.  'I hurt, therefore I am.'

The real shining moments Barry achieves in the passages of 'The Calling' are found in the relationships between he and his climbing partners.  His partners are as much a part of the book as his own experiences, and he brings the reader to know them, love them, and occasionally grieve for them.

'A travel pack he had used earlier sat on his back and it had a suitcase handle on one side and a rectangular metal frame sewn inside to make it stand like baggage. The shoulder straps could be concealed by a zippered panel on the back.


"I will just as soon as we get off of this route."


In some ways, I can identify with 'The Calling.'  In other ways, not so much.  As someone who has spent the last five years living the dirtbag lifestyle in an effort to gain as much mileage in the mountains as I can, I identify with some of his struggles, and found assurance in his perseverance.  I would like to think that I am brave and strong enough to push myself to the limits some of his narrative describes, but fear that the desire to take quite as much risk as Blanchard may not be there. Still, there are plenty of passages that simply allude to his pure love of being high in the mountains, which I can whole-heartedly agree with.

Barry is one of those great figures in alpinism who inspire so many, and 'The Calling' is an important narrative for our sport. It is real, and raw, and wildly entertaining.  Whether you can relate with some of his near-misses and triumphs, are dreaming of them, or would prefer to white-knuckle your armchair, 'The Calling' is not to be missed.