In writing a recent piece for AAI's Blog, I was describing what a typical approach to the Pickett Range -- a sub-range of the Cascades here in Washington -- involves, and bushwacking was a big part of that.

Over the years, I have worked with many climbers who are very new to the concept of bushwacking, especially of the type that we have here in Washington. Describing these things to a person who has never been in brush so thick that it literally makes forward progress impossible is a futile effort at best. In considering how to best describe the intricacies of pushing the bush, forcing the foliage, and groping the garden here in the Cascades, I was reminded of an article I had seen a few years back on the very same subject. As we all know, difficulty is a somewhat subjective thing and as such, definitions, interpretations, and general impressions vary from person to person. To help put various bushwacks into perspective, Mark Dale authored the following piece. 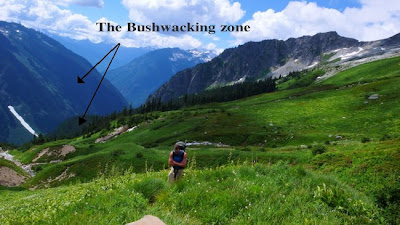 Above the buskwacking in Boston Basin, North Cascades

The Brush and Bushwhack Rating System
by Mark Dale
For years there has been something sadly lacking in the climbing world. Something necessary to help describe the total mountaineering experience in those areas blessed with challenging peaks surrounded by primeval forest. That something is a brush and bushwhack rating system. After years of the hand-to-limb combat encountered in below-timberline approaches, one comes to realize that this part of an ascent can be half or more of the battle. (Notice the use of fighting terms.)

And yet, just how does one accurately relate this important facet of a climb in words? "It was ugly, real ugly," "Brutal," "A freaking flail," "Oh, not too bad, but I did lose a pint of blood." Well, these are pretty good subjective descriptions, but what's missing here is something more definitive. What we need is a way to portray in a more precise manner those endearing struggles with the brush.

Therefore I propose the Cascade Brush and Bushwhack Rating System. This system is so named because most of my experience in the past ten years of climbing has been in the Washington Cascades. It's perfectly applicable, though, to other ranges of a similar nature, e.g. the Olympics, Northern Selkirks, British Columbia Coast Range, Alaska Range or any mountain group where below-timberline approaches necessitate brush-beating and bushwhacking. This system rates both difficulty and grade much like the technical climbing ratings in use today. 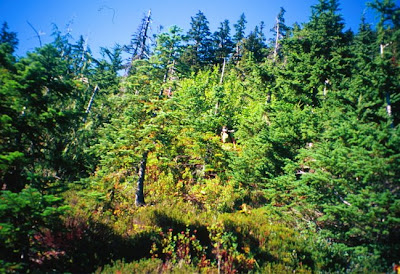 Seth Hobby enjoying some moderate
brush walking, North Cascades, WA.
Before defining system nomenclature here are a few guidelines for describing your favorite flail:
Difficulty Ratings
These apply to the "free" difficulties (no aid used) and range from BW1 to BW5, where BW stands for "bushwhack." Difficulty ratings apply to those areas of worst brush that can't be avoided.
Aid Ratings
When artificial means are used to penetrate brush, then an aid rating should be used to describe the device required. These ratings range from BA1 to BA5, where BA stands for "brush aid": 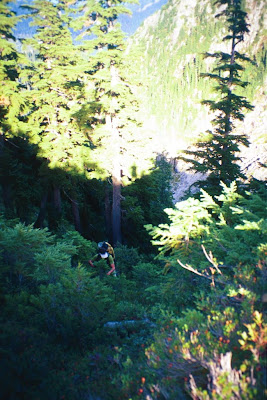 As the terrain steepens, running
"veggie belays" are often used
Creek and River Ratings
These ratings are used to describe the difficulty in crossing watercourses. The range is WA1 to WA5, where WA stands for "water":
Grades
Grades range from I to VI and follow the same general guidelines as climbing grades:
Following are some examples of rated bushwhacks: 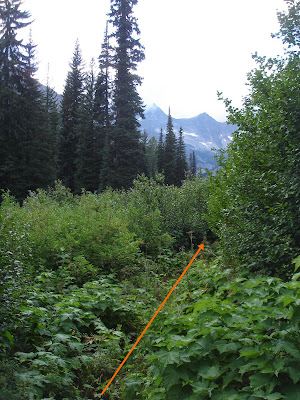 A typical climbers "trail" approaching
Mount Goode in the North Cascades.
And there you have it. No longer must one try to decipher the deranged mutterings of a victim of jungle warfare. A person needs only to apply the appropriate brush ratings to relate his brutal experience to others. And who knows? With advances in bush technology and the competitive nature of climbers, we'll probably see difficulties pushed to BW6 and beyond. And there just HAVE to be some Grade VII's out there!

So come on, folks! The next time you report a mountaineering trip that involves green hell, use the Cascade Brush and Bushwhack Rating System to tell others about it. They'll be glad you did!

Mark Dale is a Washington climber, skier and paraglider pilot and a recovering brush abuser.