Since long before I started guiding, I kept a journal of my ascents. I noted how many days it took to do a mountain route and who I did it with. I also noted how many times it took to get up an alpine route or a hard rock climb. Over the years this journal become an invaluable resource. I am now able to take that information and see patterns and statistics. And perhaps the most pertinent pattern is my success rate. 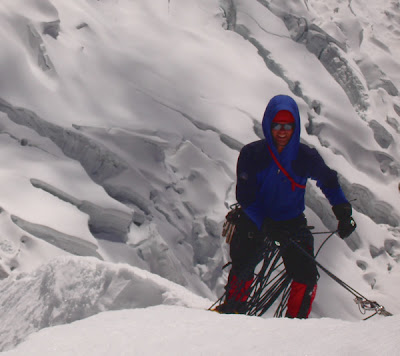 On Toqllaraju (19,790 ft.) in Peru. I was sick when we climbed this
and wasn't sure it would go...but we summited!
(Photo by Andrew Wexler)

Anecdotal evidence indicates that these types of statics are the norm for climbers who "get-after-it." Failure to summit or failure to complete your rock climb without falling are major elements of the game. Indeed, one could argue that without the possibility of failure, climbing as a pursuit is meaningless.

Dealing with failure is a whole other ballgame though. Some people are fine with it, while others throw tantrums. When one's failure is the result of another team member, sometimes grudges are created and sometimes people treat the individual who caused the failure poorly. This latter response is completely inappropriate. Climbing is a team sport and if one person can't make it and forces a team to turn back, that too is part of the game.

Some failures can be chalked up to no one's fault (i.e. the weather crapped out or a key hold broke). Whereas others might relate to improper fitness, poor route-finding, a poorly executed strategy, or any number of other things. The reality is that regardless of what caused the failure, you still failed and you will still have to deal with the aftermath. 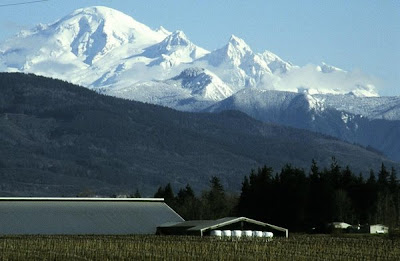 Long before I became a guide I attempted Mount Baker twice, before I summited
on my third time. I've now summited Baker 31 times.
Some people are not very good at dealing with failure in climbing. They let it eat away at themselves. "I was only a thousand feet from the summit!" or "It was just two more moves and I would have gotten to the anchor!" And while these sentiments might be true, they should not dominate your thought process. Mountains and rocks will always be there and there will always be another opportunity.

By examining my success and failure rate I was able to see that ultimately I do tend to achieve my goals. In some cases it takes two or three or ten tries. But when one's mind is set on an objective, failure is a positive part of the process. If you have failed on a summit or a route multiple times, success is significantly sweeter than it is when you get up everything every time.