Although Mount Whitney is the tallest peak in the Lower 48 (14,496') it is a very different peak that most of the other 14'ers in the US. The Sierra is a non-glaciated range that is mostly made up of jagged granite peaks. As such, the range is well known in the climbing crowd for it's outstanding alpine rock climbing and moderate mountaineering scrambles.

Sunrise on the East Face and East Buttress of Whitney.
The East Buttress on Mount Whitney is unique because it offers an aesthetic and very high quality rock route to the top of the tallest peak in the Lower 48. Throughout the years the neighboring East Face route on Whitney was the most well known on the peak and it has a long and rich history. In more recent years, with the advancement of climbing skills and equipment, the East Buttress has become the more popular of the two routes. Although the East Face is graded slightly lower (5.6) that the East Buttress (5.7-5.8), most climbers and guides would agree that they are very similar in difficulty. 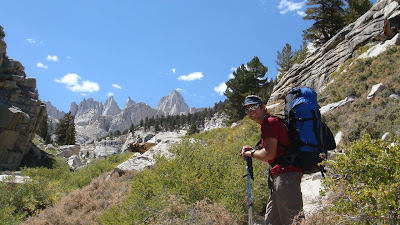 The East Buttress rises in nearly a plumb line from the base of the route at just over 13,000-feet, directly to the summit. In fact, the last belay for the route is from blocks at the edge of the summit plateau. There is also a hiking trail to the top of Whitney and as climbers pull up onto the summit from the dramatic East Face, the confused looks and questions from the folks who hike to the top are always entertaining! 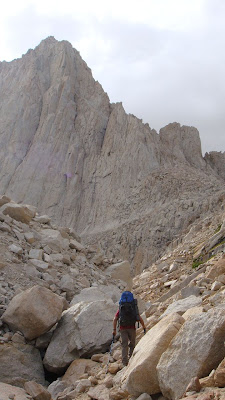 Aidan nearing Iceberg Lake at 12,000-feet
The climbing on the East Buttress is varied and continuously interesting and challenging. Many pitches involve both crack climbing and face climbing with sections of pure friction climbing, often at or near the crest of a sometimes narrow and exposed ridge. The quality of the rock is nearly perfect on solid, golden Sierra granite. Many climbers call this one of the best moderate routes in the range.

Thanks to AAI climber Michael Kaye for letting us publish his photos from his recent climb of the East Buttress with AAI guide Aidan Loehr. 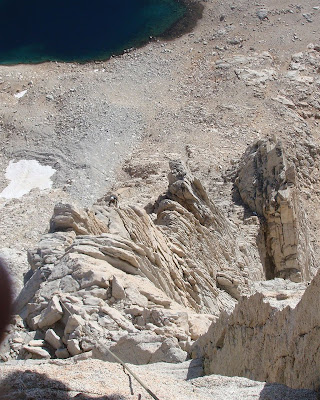 Michael following a pitch on the narrow
crest about halfway up the route. 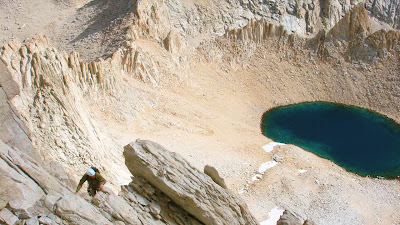 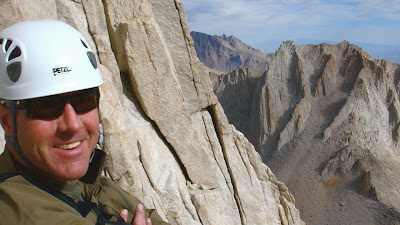 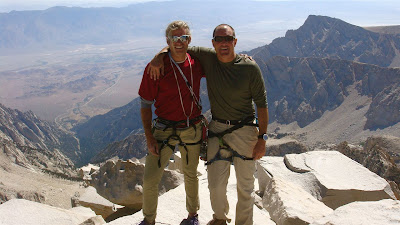 Aidan and Michael enjoy a perfect day on the summit of Whitney.

If you haven't had a chance to climb in the Sierra, join us in any season for a route on Whitney or any of the other spectacular peaks of the High Sierra!