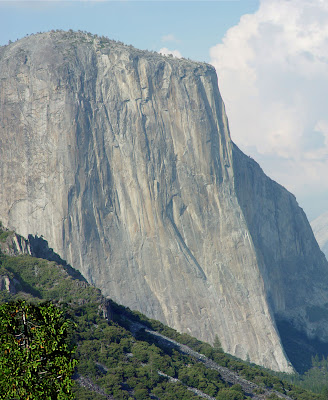 They were just some of the trash picked up during last week's 5th annual Yosemite Facelift. The Facelift is put on by the Yosemite Climbing Association. Climbers from all over the world who were in the valley participated. Many also came just for the event, drawn by free camping, free beer, and world class climbing.

Over the course of 5 days over 35,000 pounds of trash were picked up. The largest single item was an old style satellite dish. Numerous cigarette butts were collected, my personal record was 52 in one hour.

Each morning participants picked up trash collecting paraphenalia and registered for the gear raffle at day's end. Each night there was free entertainment, including slide shows by the likes of Glen Denny, Don Lauria, Dave Nettle, and the hilarious Timmy O'Neil. The Reel Rock Film Tour also made a stop for the event. The Facelift concluded with a big party featuring free food and live music.

The Facelift is the brainchild of Ken Yager, founder of The Yosemite Climbing Association. Yager thought it was a big success, "every year we find less and less trash, which is great."