Making Fire with the Stone Man

Teaching avalanche courses and going to school every morning this winter has recently derailed me of getting any personal skiing done this season. With my first day off in six weeks, I was really excited to finally make some turns of my own. Last Friday, I set my sights on stretching my legs, seeing some 'new-to-me' places to tour around Mt. Herman (in the Mt. Baker backcountry) and skiing the ever-looming steep skiing objective that stares me down every time I drive up to Heather Meadows - the Stone Man Couloir. 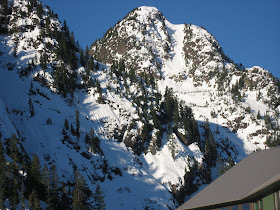 A sunny view of the couloir from the Heather Meadows Lodge at Mt. Baker. 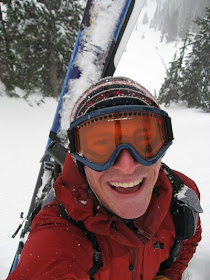 Justin getting stoked for the STONE MAN ......

Winter thrill seekers too often dismiss the potential for fun to be had in the backcountry anytime there's less than several feet of new snow. I'm all for skiing the steep and deep when it's around, but I'm also keen on being able to tour longer distances without breaking trail for hours. Last week, a few inches of fresh provided just the right balance between good skiing and touring conditions, during a time of relatively safe avalanche hazard. We settled on a tour plan that would traverse over the shoulder of Mt. Herman and allow us to ski downhill to the base of the couloir. 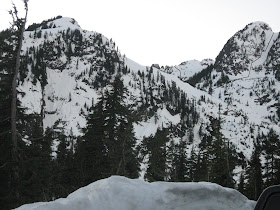 The traverse over Herman to the Stone Man Couloir is outlined in black. 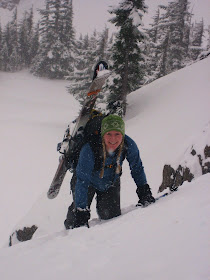 Justin's wife, Zephyr, with her skis on her back.

Visibility was sparse early in the morning. Finding our way up to the first high col on Mt. Herman took a while with the coming and going white-out conditions. It was nice when it cleared enough for me to put away the GPS as we started booting up the final few feet, just before our first run of the of the day. We ripped skins off our skis at the 5800' col on Mt. Herman and enjoyed a 500 foot run to the base of the Stone Man. 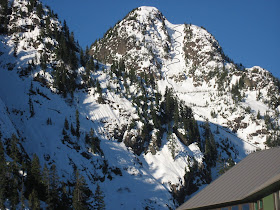 Justin and Zephyr's route through the Stone Man Couloir is drawn in black.

We booted up the 800', 45+ degree Stone Man couloir, arriving at its top in windy conditions and zero visibility all around. Conditions in the couloir truly involved survival skiing. The chute is so steep it had sloughed off most of the previous week's new snow. What snow remained peeled away beneath my ski tips exposing an icy crust ahead of each successive turn. Skiing out the left exit around the cliffs at the bottom involved negotiating the chute's steepest pitch which neared 50 degrees. 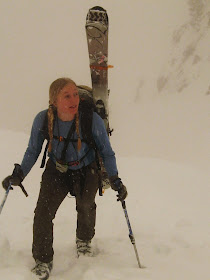 To finish the tour, we continued traversing north from the base of the Stone Man couloir. Along the way we found some of the best snow of the entire day as we skied through the trees completing the circuit back to Heather Meadows and the Mt. Baker Ski Area. All in all, the tour involved 3000' of elevation gain and loss we skied a distance of about 4 miles.


American Alpine Institute at 6:00 AM