There is no doubt that rappelling is the most dangerous thing that we regularly do in this sport. There are more climber injuries and fatalities from mistakes rappelling than from any other place in all of climbing. However, there are some things that every climber can do to make rappelling safer.

First, if it is possible to safely walk off from the top of a climb, simply walk off. Limiting the amount of time that you spend rappelling is a surefire way to limit the amount of exposure that you have to potential mistakes.

Second, climbers should always try to tie off the ends of their ropes in order to close the system. This is a simple thing to do that is often overlooked. Some climbers are afraid that their ropes will get stuck after they throw them...which is a legitimate fear. Closing the system should be a default tactic. But if there are extenuating circumstances, then perhaps the system should be intentionally left open.

People seldom think about tying knots in the end of the rope in single pitch terrain, but ironically, that's where most people accidentally rappel off of a single end of the rope. All that it takes is a minor rope offset to ruin your day. Knots in the rope will keep such a thing from being anything more than another minor element to fix. 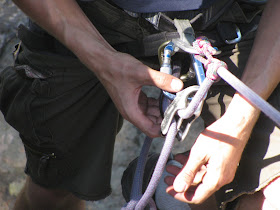 Rappelling with a Prussik above the Device
And third, climbers should use some kind of rappel backup. 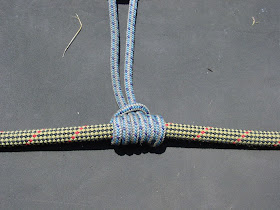 A Prussik Hitch on a Rope
There are two friction hitch backup options that are commonly used. Some people like to put a prussik hitch above their rappel device, whereas others prefer to put an autoblock hitch below the device. There are advantages and disadvantages to rappelling both ways. The biggest advantage to either of these options is that you are less likely to die if you make a mistake. The biggest disadvantage is that it takes extra time to put these things together... 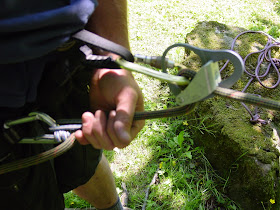 Note the autoblock coming off the climber's legloop.
Most people will put their hand on the autoblock hitch while rappelling.
Rappelling with a friction hitch above the device has gone a bit out of fashion. One advantage to rappelling with a prussik hitch above is that it is easy to switch a rappel system into a rope ascending system. The prussik is already attached to the climber's belay loop, so all that he has to do is to add a second friction hitch for his feet below the first friction hitch.

Most climbers now rappel with a friction hitch (usually an autoblock hitch) below the device, attached to a leg loop. This allows both hands to hold the rope below the device which provides for more redundancy in the rappel. 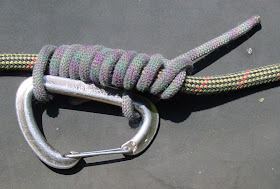 A friction hitch works well below the device...most of the time. It is, however, imperative that climbers who employ this technique be extremely careful. If a climber elects to hang from the rope by nothing more than his device and a friction hitch, it is possible that the hitch could be disengaged if it touches the device. Such a thing would result in catastrophic failure. This usually happens when one twists his body away from the friction hitch. If a climber needs to mess around with ropes or something else while hanging from a device and a hitch, he should definitely put a catastrophe knot in below the hitch. This will ensure that should something happen, the climber will not fall to the ground.

Rappelling is the most dangerous thing that we do. So why not create more security by trying to walk off when you can? Or by tying knots in the end of the ropes? Or by putting a friction hitch into the system? Any one of these simple techniques could save your life...