AAI Backpacking Guide Jeff Reis has been behind a number of our aerial photo blogs. Jeff is a private pilot who gets out in his little plane with a camera quite often. Recently he invited me to join him on a tour of the Cascades...

Our flightseeing tour took us over Mount Baker, Mount Shuksan, the Pickets, Cascade Pass and part of the Ptarmigan Traverse. It was an awesome experience to see so many remote peaks by plane in such a short time. The following photo essay details some of the trip's visual highlights!

Note that the pictures may be enlarged by clicking on them. 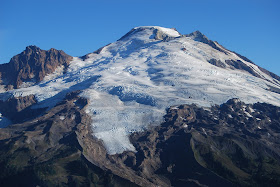 The Easton Glacier on Mount Baker
Due to the warm summer, this glacier is far more broken than normal.
Many parties are finding that they must belay across numerous crevasses. 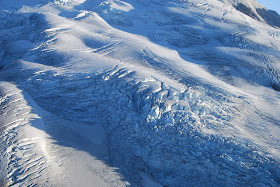 A close-up of the icefall between the Easton and the Deming Glaciers. 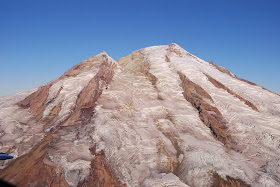 Mount Baker's Boulder Glacier is in late season conditions.
Any ascent of this route this late in the season will require ice climbing skills. 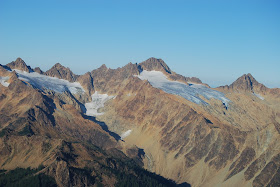 The Twin Sister Range
The peak in the center of the picture is the South Twin and the peak on the right is the North Twin. In 1995 I made the first recorded winter ascent of the Northwest Face of the South Twin. 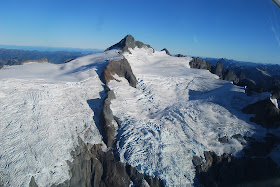 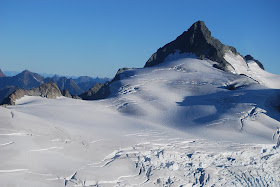 The top of the Sulphide Glacier and the Summit Pyramid of Mount Shuksan
It's hard to see in this photo, but during the flight we were able to spot a few ski tracks on the Sulphide. 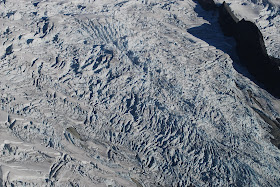 Icefalls on the Sulphide -- The climbing route avoids this mess. 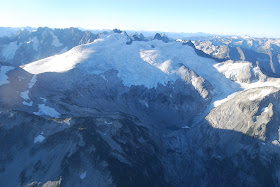 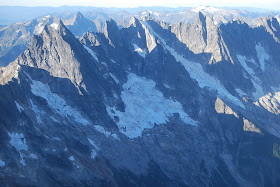 This is arguably one of the most remote places in the Cascades. The peaks pictured above are in the Southern Pickets. From left to right we are looking at the McMillian Spires, Inspiration Peak, Mount Degenhardt and Mount Terror. AAI Guide Alan Kearney recently wrote an excellent article about his 35 year obsession with the McMillian Spires. To read it, click here. 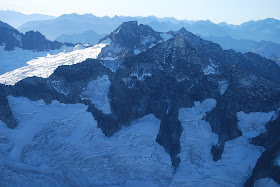 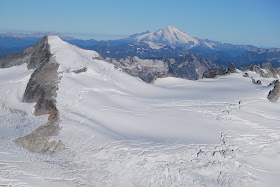 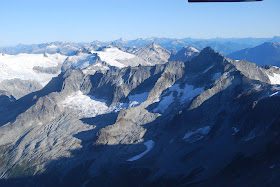 The Torment-Forbidden Traverse
Mount Torment is the peak on the left end of the ridge.
The respected climbing guide and writer, Craig Luebben was killed in an icefall accident
on Mount Torment earlier this summer. 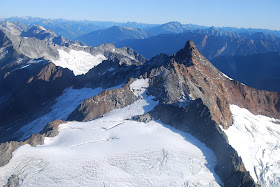 The top of the Sahale Arm, Sahale Peak's summit and Boston Peak.
If you look carefully, it's possible to see the Forbidden Glacier and the North Ridge of Forbidden in the background.
It is clear that there is not much snow left in the Cascades. We did get a dusting late last week and you can see the remnants of that in some of these pictures. The glaciers don't look as dirty or as gray as they did prior to the snowfall...but other than that, this is one of the driest times of the year. As such, it is really interesting to look at an array of peaks throughout the range...!