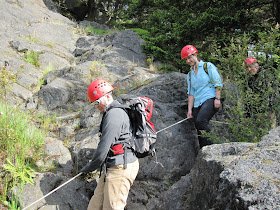 Climbers moving down a handline.
Second, they might use the lobster claw technique. This is where an individual girth-hitches two slings to their tie-in point. A locking carabiner is then clipped to the end of each sling. A climber can then clip both slings to the fixed line as he or she moves up the line. As the climber gets to set pieces, he or she can clip past the piece without coming completely off the rope. 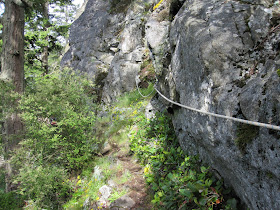 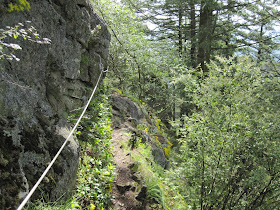 Another view of a static line protecting an exposed area along a trail.
The third technique is to place a prussik on the fixed line. A prussik offers the most security as it won't allow a person to fall anywhere if they slip. If you have one section that requires such tactics, it's not a bad idea to pre-rig the prussiks so that the beginner doesn't have to rig it in an exposed area.