In the early nineteen-hundreds the first endurance and adventure race took place in the Pacific Northwest. A crew of hearty individuals raced from Bellingham to Glacier by whatever means necessary (car, train, motorcycle) and then began to run. They ran from Glacier to the summit of Mount Baker and back, before they could take their machines back down to Bellingham.

The first to arrive in Bellingham would win a purse of gold worth $100.

There were no rope teams and little additional safety if something went wrong. It was a dangerous race. But $100 was no joke in 1911. Indeed, some of the runners would even set-up camp at 4,500 feet and run to the summit and back twice a day to train.

A documentary film is currently being put together on the mountain runners and the American Alpine Institute was brought in to provide support, rigging, and a stunt man for some of the shots. As a result, Tom Kirby, Ross Buchanan (our intern) and I went up to the mountain with the film crew last week to help them create a seminal moment in the story of the runners.

Apparently one of the runners fell into a crevasse. He was ultimately rescued, but the crevasse fall was serious enough that they decided that they would no longer run the race. 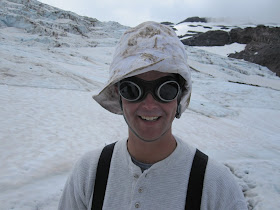 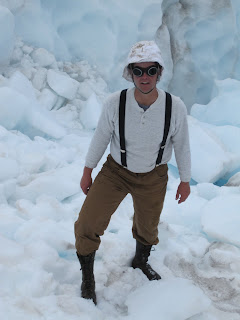 The logging boots had studs on the bottom, but they definitely weren't mountain boots.

After some initial training, we worked our way up into the lower icefall on Mount Baker's Coleman Glacier. This is the same icefall that we regularly use for our ice courses and we knew that we would probably be able to find a good crevasse to work with somewhere. 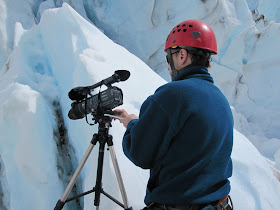 A cameraman shooting the crevasse sequence.
After scouting a good portion of the icefall, we found a nice crevasse with a floor that didn't pinch off. 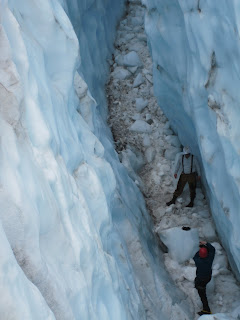 Running through the scenes at the bottom of the crevasse.
Obviously this wasn't the most stable crevasse in the world. There was a fair bit of debris on the floor which meant that things were occasionally calving off. None of the debris seemed to be recent, but we still elected to get the shots in a get-in-there-and-get-it and then get-outta-there fashion.

The film's director, Todd Warger, took a number of different shots of me lying on the bottom of the crevasse as well as running around and trying to find a way out. He wanted me to look cold and scared. Neither of these things were hard to do at the bottom of a drippy crevasse in cotton clothing.

When I finally got out I had to change my clothes completely. The cotton racer clothes were soaked by the time we were finished for the day and so were we. 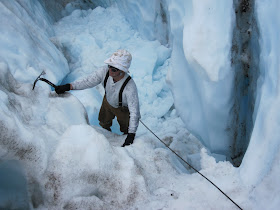 The next day we climbed up above the Hogsback to find a crevasse to do the second series of shots. Eventually we found something that would work, but it wasn't great. It would have been nice if the crevasse had been a bit wider. 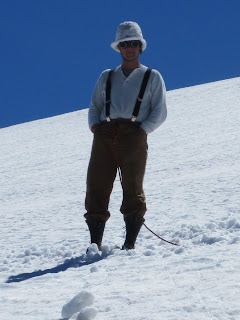 Prepping for the crevasse fall. Note the rope coming
out of Jason's fly. He is wearing a harness under the pants.
I wore a harness beneath my pants for the shot. We buried and equalized three pickets and clipped the rope to them. The crux of the shot was that I would have to slide through the frame without the camera seeing the rope. To make this happen we stacked the rope next to the anchor and put it down the right-hand side of my body. When I slid, the cameras were on the left and I would have to roll to my right just before entering the crevasse to mask the rope.

Once everything was in place I did it. I slid towards the crevasse acting like I was trying to stop and screaming the whole way. My body launched out over the crevasse, cutting perfectly through the frame.

Even though I suffered a bit for the stunt, it appeared to be worth it. The footage of the crevasse fall was absolutely perfect. It's not easy to see the rope and on the first look at the fall, it looks like I took a completely out-of-control slide into the depths.

It was a lot of fun to be involved in a film shoot like this and I'm looking forward to the release of the documentary in 2011. Following is the shot of a "terrified" Jason Martin falling into the crevasse. You'd think with all the years that I spent in the theatre, my screams could have been more convincing: