I just got back from a week of working with WA Dept of Fish and Wildlife. The work was some of the more interesting that I have done this summer. I spent the week collecting prey remains from from golden eagle nests in an attempt to identify what the eagles are eating. Eagles will put their nests on cliff faces often in caves to protect them from the weather. Getting to many of these nests was pretty challenging and each presented a unique problem. Some nests have no overhead anchors and very loose rock making for difficult climbing conditions. Once at each nest I would collect any pellets and any remains of prey that were in the nest.

Me sitting in a particularly challenging nest. 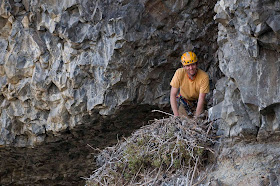 I found all sorts of animal parts in the nests including deer faun legs, coyote skulls, lots of marmot skulls, game bird legs, raptor skull, and snake parts. From a non-biologist perspective it appears that eagles will eat anything available and are pretty good hunters.

One of the last nests we did still had a chick in it. Soon after this photo was shot the bird fledged and made a remarkably graceful first flight out of the nest and down to the valley below. 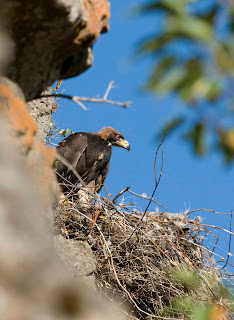 The bird was captured, banded and fitted with a GPS tracking device.

Banding the bird. This is the business end of an eagle. The talons are the main danger in dealing with eagles. 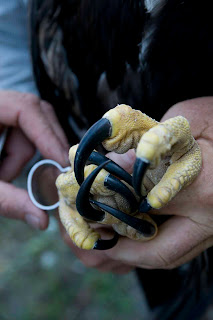 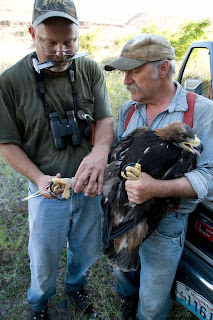 The eagle with the GPS tracker. 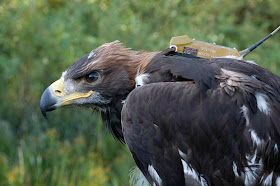 And a couple of eagle portraits. 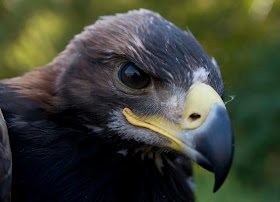 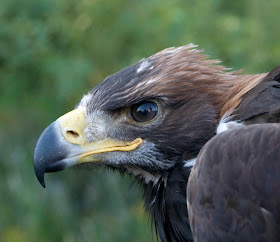 The eagle then had to be returned to the nest. This involved wading across a creek, hiking up a hill, climbing down to the nest and putting the bird in. 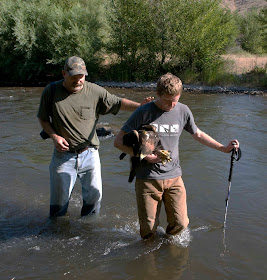 In this photo I am standing in the nest so I can put the bird back. After grabbing the bird I put it in the nest and quickly climbed out. The bird stayed and we left. (WDFW photo) 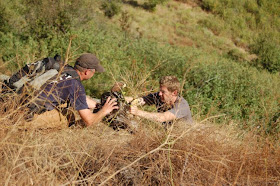 --Alasdair Turner, Instructor and Guide
American Alpine Institute at 6:00 AM