Not every film I review for this blog is completely connected to the mountains.  Occasionally, I post reviews of books and films that are only marginally linked to mountain culture.  Usually these are connected to our mission of bringing you the most interesting mountain content by some small thread.  The 2003 film, The Snow Walker is one of these.  No, it's not about climbing or skiing, but it is about indigenous culture and adventure, two things that we at the American Alpine Institute care about a great deal. 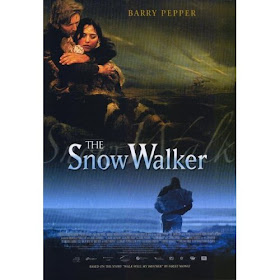 The Snow Walker is an interesting study of cultural understanding.  The story takes place in the fifties in a world where there is little tolerance for individuals who are not white and male.  Charlie Halliday (Barry Pepper) is a brash young pilot in Canada's Northern Territories who is enlisted to fly a sick Inuit woman (Annabella Piugattuk) who speaks very little English to a hospital in Yellowknife.  In the process of bringing her to safety across the barren tundra, Halliday crashes his plane.  The arrogant pilot must learn modesty, trust and understanding as the only way to stay alive in the barren arctic wastes is to put his faith in Inuit survival techniques.

Most of the stranger-in-a-strange-land culture-clash films have two elements to "make them exciting."  First, they tend to take place in a violent setting.  In other words, there is some kind of war or conflict, often between the cultures portrayed.  And second, there is usually a romance.  Sometimes the romance is between members of the same culture and sometimes it's cross-cultural.  Some excellent examples of these types of films include Kevin Costner's Dances with Wolves, Tom Cruise's The Last Samurai, last year's ubber-blockbuster Avatar, and even Disney's Pocahontas.  The Snow Walker breaks away from these cliche models and does something completely different.  There is no war between cultures and there is no romance between the two lead characters.  Instead, the film documents a story of trust and friendship deep in the wilderness and in many ways, the simplicity of the story creates a far more powerful message than some of the other films that have dealt with this theme.

Barry Pepper -- the film's lead -- is one of those actors you know you've seen before, but often can't place.  He's the guy that's in every movie, but when it comes right down to it, you can't name a single one.  Well, let me do it for you.  Pepper has been in big Hollywood productions like Seven Pounds, Flags of Our Fathers, 25th Hour, We Were Soldiers, Knockaround Guys, The Green Mile, Enemy of the State, and Saving Private Ryan.  He has also played leading and secondary roles in a variety of television shows and lesser known Hollywood and independent films.  The actor has even performed a feature role in a "live action" video game.

Pepper's performance in The Snow Walker makes me wonder why this particular actor has been typed as a supporting character in most of the work that he has done.  The actor has a breadth of range that has been ignored by big Hollywood directors and producers.  As most of us only have the slightest knowledge of Inuit culture, we first empathize with Pepper's character, lost in the wilderness. And then as he begins to connect with his Inuit companion, so too do we.

The Snow Walker is not a film that will blow you away with its originality.  You've seen this story before.  Maybe you haven't seen it with this particular culture being explored, but you've likely seen it with everything from aliens to Samurai. However, it is unlikely that you've seen this type of cultural-understanding story done before in such a tender and "un-Hollywood" way.