Flossing is a practice recommended by most dentists, but in the mountains flossing can be bad for you. “Rope Flossing” is a potentially fatal exercise that should be avoided at all costs.

In the mountains, “getting flossed” refers to being plucked off the mountain by the rope of another climbing team. The consequences for such an event are usually tragic, and constitute yet another objective hazard that climbing parties should be aware of. In busy mountain ranges such as the alps, thousands of climbers with a varying array of ability levels attempt hundreds of classic routes daily. Here in Chamonix, accident data is not reported as conveniently as it is in Accidents in North American Mountaineering, but I do know that the PGHM rescue helicopter does upwards of 12 rescue flights daily. You can bet that a team or two has been “flossed” over the years. 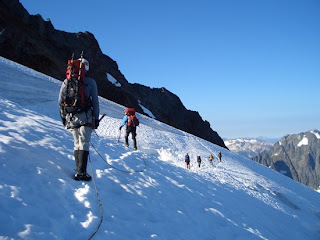 At times, rope-flossing has been a real threat to my safety and the safety of others around me. I have arrived at route bottlenecks in the past only to find groups of four to six climbers all tied together on the same rope, with 10 or 15 meters of slack between them - most of which is being held uselessly in their hands. Their blank expressions and blinking eyes often signify a level of ignorance and maladroitness that I find frightening. The most stated justification for this technique that I have heard stems from the irrational “safety in numbers” heuristics trap, based on the assumption that the chance of something going wrong diminishes as the group size increases. There is often no running belay (protection points) between them, nor do many of these teams have a grasp of using existing terrain (horns, flakes, etc) to their advantage. It begs the question, what will happen if one team member falls? I don't waste time trying to answer the question - my priority is to either pass or bail ASAP. Poor rope-work and dangerously large group sizes have led me to suggest to some rope teams (who peculiarly seem to arrive from the eastern European countries) that they should A), divide their rope team into smaller ones, or B) that they should put the rope away and climb unroped. It may seem crazy, but a poorly-used rope is often more dangerous than none at all. At least that way only one person at a time can fall....

I was told a story by a colleague about a large group of climbers (Seven) he encountered on Mt Blanc who were traversing the Grande Couloir and were making their way up the loose rock on the other side. The slack rope between them was dislodging many stones, and their pace was at a stand-still (at the most dangerous part of the route). Out came my colleagues’ knife, and the seven-person team became two 2-man teams and one 3-man team. There was little argument when the knife began slashing sheath and core.

The most famous example of rope-flossing in recent history was prominently displayed in the 2001 Sony Pictures abomination Vertical Limit. In the beginning of the film, a critical error (one only possibl 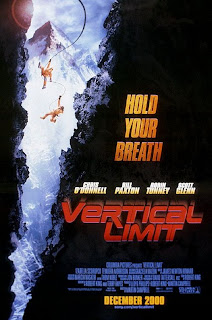 e in hollywood-land) causes a rope-team of two to fall simultaneously off of a multi-pitch tower in the Arizona desert. Below them, Royce Garrett belays his son and daughter Peter and Annie Garrett while they follow his pitch. The rope between the two falling victims flosses the father from his belay station (i am not sure how his body is able to withstand the force of the fall-factor 10+ fall from above while his anchor fails, but physics must not work the same way in Hollywood...) In series, Royce pulls off Peter, who pulls off Annie, until five dangling and spinning people are stopped by a #3 and #5 metolius camming unit (gosh I love those sizes). As is customary whenever climbing is portrayed in a Hollywood film, the knife comes out eventually to cut the rope - in this case it’s the father who pays the ultimate sacrifice so that his two children can survive in order to endure an incredibly contrived and totally improbable half-baked climbing epic on K2 later in the film (For more examples of knives and climbing ropes, read or watch Touching the Void, The Eiger Sanction, Cliffhanger, or any James Bond film).

More recently, in May of 2002, there was a high profile rope-flossing incident on Mt Hood. A four-person team fell from near the summit and were not able to arrest their fall. Their rope snagged a team of five during the fall, until two rope-teams (9 people) were tumbling down the slope. The teams slid into a bergschrund at the bottom, and three climbers were killed, while three were critically injured. The accident underscored the limited threshold at which self-arrest is a viable means of stopping a sliding rope team - sometimes the slope is just too steep for self arrest to be appropriate, and more secure techniques should be used, such as the placement of snow pickets, the use of belays and stances, etc. Perhaps in extreme circumstances, no rope at all could be safer. The public’s attention to the accident was unfortunately distracted by the subsequent crash of the Blackhawk rescue helicopte dispatched to the scene.

The rope is a tool that is effective only when used properly. It can provide a great service to the climbers tied to it by keeping them attached to one another, but also hopefully attached to the mountain. Proactive self-education in the form of taking courses and reading how-to books such as Mark Houston and Cathy Cosley’s Alpine Climbing: Techniques to Take You Higher go a long way in providing climbers with the skills to make well-informed decisions on how best to employ the rope as a tool of safety and security, not one of hollywood mayhem.