On the first day of the course we met all of the new guides at the American Alpine Institute office in Bellingham.  We were extremely excited to meet the new guides and to begin working with them.  The group comes from diverse backgrounds and each of them has a great deal to offer both AAI and those who choose to climb with AAI.

After a meet-and-greet, the group went out to Mount Erie to practice single pitch guiding techniques and to study the systems.  All of the new guides already hold a Single Pitch Instructor certification or higher, so it was primarily a review.

In the late afternoon we returned to the Institute office, where the guides met our director and learned about the company's history.

On the second day of the guide training, AAI Director of Staff Development, Michael Powers joined us just outside of the Mount Baker Ski area.  It was there that we began working on the guide's snow and ice skills. 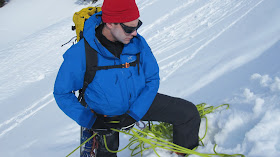 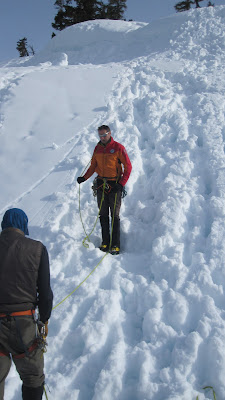 After spending a wet night near the town of Glacier, we returned to the ski area and began to practice crevasse rescue techniques. 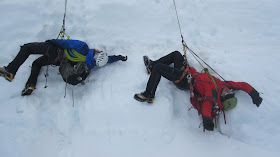 Dustin Byrne and Andrew Yasso pretend to be injured climbers in a crevasse rescue scenario
Dustin has worked as our Alaska Food Coordinator over the last few seasons and Andrew is currently our Alaska Program Coordinator.  Both of these new guides are working on Denali this season. 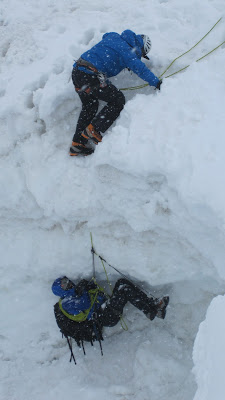 David tries to rescue Ben Gardner in a crevasse rescue scenario.
Ben is an avalanche educator and the former director of the North Carolina Outward Bound Climbing Program.

On the fourth day, we drove three hours to the east side of the mountains to begin working on rock in the scenic town of Leavenworth, Washington. 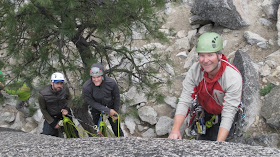 Ben shares a belay with Chad Cochran, while Chris Benson climbs
Chad is an AMGA certified Rock Instructor from West Virginia, and Chris is a avalanche educator
and former Outward Bound Instructor. 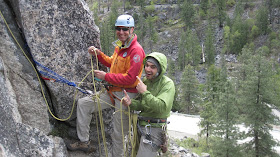 Andrew is very impressed by the fact that he gets to work with ubber-guide Mike Powers. 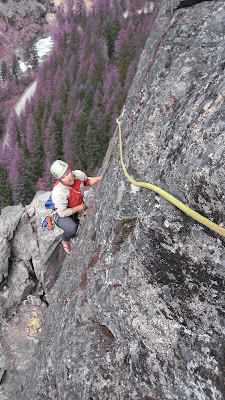 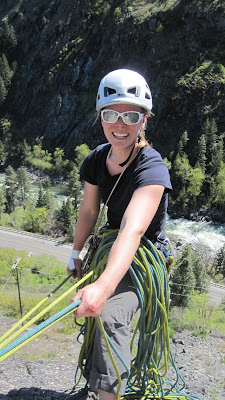 Erin Smart belays on the February Buttress
Erin is an avalanche educator who has worked part time for us for a year. She will also be working on Denali for AAI. 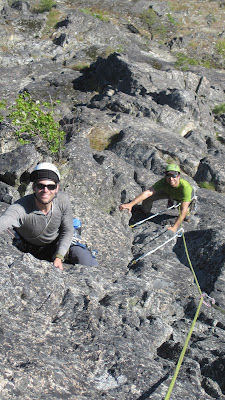 David leads a group on February Buttress, While Chris follows another group.

Early on the eighth day of the course, we packed up camp.  Before leaving town, we elected to climb one more multi-pitch line.  The guides were able to select from a number of routes in the Duty Dome area.  I climbed Heart of Gold (5.10a) with Ben and Chad. 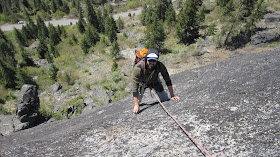 Ben follows Heart of Gold, a slabby four-pitch 5.10a 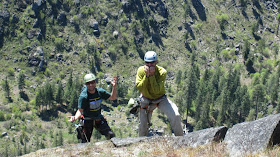 Mike is biting his fingernails in mock fear as the team gets way up there.
And Chris throws up his hands in defeat!

After we completed our ascent, we made our way over to Snoqualmie Pass.  The plan was to climb a little alpine rock peak called the Tooth.  The Tooth is arguably the most popular alpine rock climb in the state.  It's only an hour and a half from Seattle, so it can get a bit busy.

We went to bed early that night to prep for the next day.

Unfortunately, we woke up to rain and slugs in the campground.  Rain and slugs don't make for a good summit day...so we bailed back to Mount Erie where we began to work on rock rescue skills. 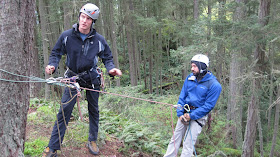 Chad teaches the group a rock rescue technique off a tree

On the tenth day of our training, we finally made our way up to the North Side of Mount Baker.  We run quite a number of courses on the North Side, like Baker Ascents, Glacier Skills Courses, Denali Preps and Ice Courses.

Once we obtained the glacier, we began to work on glacier climbing skills, glacier skiing skills and ice climbing techniques. 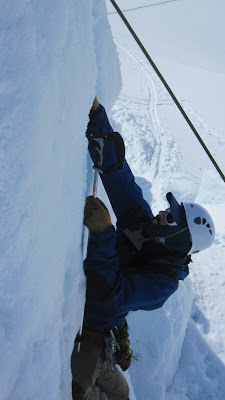 Ben practices ice climbing with a whippet...just to see if he could do it. 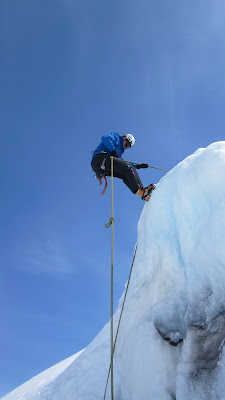 David rappels off of a serac in the Coleman Icefall 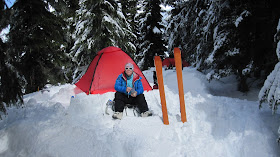 Erin relaxes at her tent after a long day on the glacier.

We got up early and got after it because it looked like rain was going to come in later.  We continued to work on the skills that we began to develop the preceding day and then hiked out that evening.  We didn't get back to Bellingham until approximately 11pm. 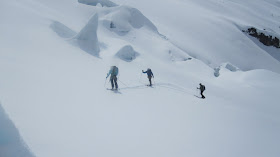 Skinning up the Glacier Amongst the Seracs

On the twelfth day, we rested...  Something we really needed.  None of the days up to that point were short.  Indeed, most of them found us still working on the snow or at the crag until 7pm or later.

On the morning of the thirteenth day it was raining everywhere in the state.  There were flood warnings for areas both east and west of the mountains.  As such, we spent the morning going over administrative things.

At about noon we left for the east side of the mountains.  At five, we arrived in Frenchman Coulee, a desert cragging area east of the mountains.  It was the first place we found where it wasn't raining.  There we began to review our rock rescue skills some more. 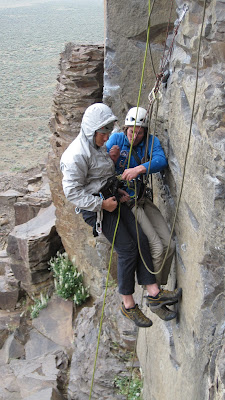 Dustin and Chad work on their Rock Rescue Techniques 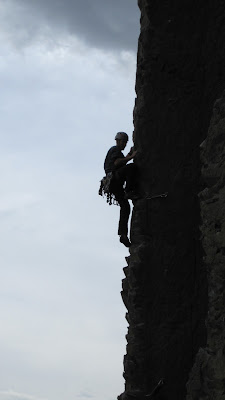 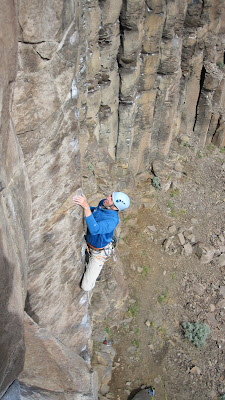 One of the great problems with the 2011 training was access to alpine rock.  Washington Pass -- where we usually spend a great deal of time on our trainings -- was closed.  There was too much snow at the Pass and they hadn't opened the road yet.  As such, we attempted the Tooth a second time...and this time we were successful!

We all skied in and skied out in order to practice ski guide skills and techniques.  I really didn't want to carry a second pair of boots up to the peak, so I elected to climb the Tooth in ski boots...something that was actually quite difficult! 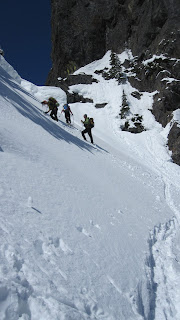 The Team Approaches the Saddle near the Tooth 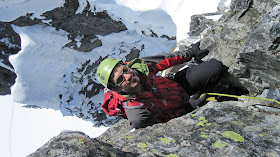 Andrew Climbing up the Tooth 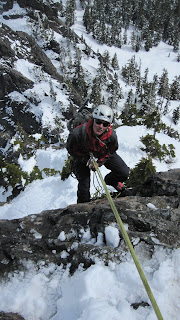 Dustin Rapping Off the Tooth 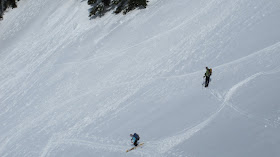 Guides Ski down the Tooth Cirque

On the final day of the course, we returned to Leavenworth and climbed variations to the R&D route on the Icicle Buttress.  After completing our four pitch adventures, we made our way back to Bellingham for debriefs with the Director...

The last week of training, the guides went out on a student teaching trip.  They continued working with me and with some of our real climbers over a period of five days.  Following that, we set them free...

We do require that each of our guides continues their journey and that they each take AMGA courses or participate in internal guide trainings or both.  The result is that every guide is always getting better at teaching, becoming stronger at climbing, and developing better guide techniques...