The Problem with Rappel Back-Ups Off Modern Leg-Loops

Innovation in climbing equipment almost always leads to better and more effective gear. But it also leads to problems. This is why it is important for every climber to educate themselves about new equipment and gear as it comes out.

I recently was shocked to find a somewhat major problem with my brand new harness. I bought a harness with "fast-buckle" systems. These systems have been around for five years or so, but are becoming an increasingly popular system on harnesses. The fast-buckle is essentially a system that allows you climb into your harness and tighten it up. You don't need to double it back or anything, once it's been tightened, it's supposedly good.

I've always been concerned that these harnesses might cause people to forget to double themselves back if they use a "normal" harness after using a fast-buckle for a period of time. But such a concern is nowhere near as disturbing as what I found when playing with my new fast-buckle harness.

I discovered that the leg-loop can actually unbuckle itself if you clip your rappel back-up friction-hitch directly into it near the buckle. See the following picture for what not to do with your carabiner on your leg-loop. 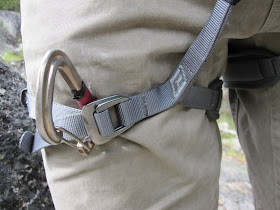 Note the location of the carabiner on the buckle. If you actually had to use a rappel back-up
clipped to this carabiner, it could potentially cause the buckle to release. Do not do this.

The best thing to do with the friction-hitch back-up in order to avoid an unintentional unbuckling, is to clip it to the leg-loop near the crotch. The strap that goes up to the belay-loop will isolate the carabiner from the buckle and will not allow it to unbuckle. 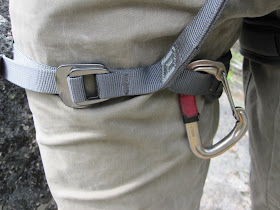 A carabiner clipped into the appropriate place on a fast-buckle harness for a rappel back-up. 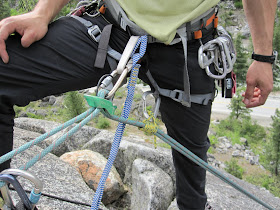 A climber set up to rappel properly with the carabiner to the back-up friction-hitch
clipped near the crotch.

Every new piece of equipment has a few bugs to work out and the fast-buckle harnesses are no exception. The problem is that a lack of knowledge on this particular issue could lead to an injury or a fatality. So spread the word far and wide. This is a great invention, but it's really only great if everyone knows its limitations.