Well, it's not really that much of a dilemma.  A few years ago, somebody suggested to me that one could save space and go lighter if he ditched his mug for hot drinks.  The idea was that you're already carrying water-bottles...why not use those instead?

So I did.  I ditched the mug and started to drink all of my hot fluids out of my Nalgene bottles.  This worked for awhile, until I found out about polycarbonate and Bisphenol A.

If you've had you haven't heard some rumblings about this, you've probably been in the backcountry too much. This controversy set the outdoor blogs and forums on fire a few years ago.

Essentially, many water bottles are made out of polycarbonate.  The problem with this is that the bottles may leech Bisphenol A into the contents.  This is exacerbated in hot liquids, older bottles, or in bottles that you store fluid in for a long period of time.

The problem with Bisphenol A is that this estrogen-like chemical has been linked to breast cancer and the onset of early puberty. Studies have also raised concerns about the effect of such feminizing hormones on men, such as breast enlargement or dropping semen counts.

So after finding out about this, I wasn't that psyched on my water-bottles any more.  I know that many companies have taken steps to keep this chemical out of their bottles, but I didn't want to chance it.  As a result, I invested in a little metal water bottle, which mostly worked well.

It was always a bit difficult to hold the plastic bottles after filling them with boiling tea. This was much worse when I used the metal bottle.  Indeed, I actually made a little cosy in order to comfortably hold the bottle.

And so all was well for a time...  But then it happened.

Inexplicably, I put a plastic water-bottle into my pack instead of a metal bottle.  I don't know why I did this.  And the bottle I put in the bag wasn't from one of the well-known bottle manufactures. No, it was from a gear rep and it had a company name on it...

I didn't think this would matter.  It looked just as heavy as any Nalgene bottle I'd carried in the past.  But it turns out that it wasn't.  When I put my hot water into the bottle, it changed shape and became something all together different. 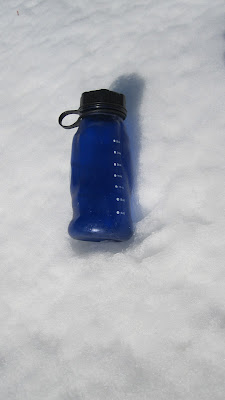 A bottle melted out of form by boiling water.

This had never happened to me before, so I was a bit shocked.  I didn't expect the bottle to melt.

The moral of the story isn't that I've gone back to carrying a mug, but instead to say, check your bottles with hot water in them before you take them into the backcountry,  If there's something weird about them, it's better to know ahead of time than during a trip...