There is a commonly used knot out there that many people use regularly to join two ropes together that is totally misrepresented by its name. The Euro death knot (EDK) is not dangerous and it is not a death knot. It is likely that American climbers gave the knot this name when they saw Europeans use it because it looked sketchy.

The EDK is officially known as an overhand bend or an overhand flat knot. It would be far better to refer to this knot by one of these names as they do not strike fear into those that use the knot. 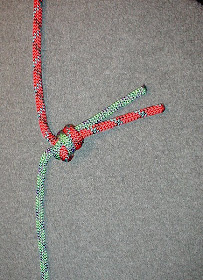 The Overhand Bend (AKA Overhand Flat Knot/Euro Death Knot)
In this photo the tail is very short and there is no back-up to the Overhand Bend.
Photo from Wikepedia

Most people like the overhand bend for two reasons. First, because of the knot's asymmetrical profile, it tends to pull smoothly over edges and doesn't get caught as easily. And second, it is very easy to untie.

To tie the knot, lay both ends of the rope together. Make sure that they are pointed in the same direction and then make an overhand knot in both ropes at the same time. This is the overhand bend. Most guides tie a backup by adding a second overhand bend next to the first. This will keep the knot from rolling if there are unexpected high loads.

Most of our guides tend to tie not only their rappel ropes together with an overhand bend, but their cordelletes as well. Guides tie their cordelletes with this knot because it is easy to untie. A cordellete that may be opened has a great deal more flexibility. It can easily be opened up and used like a webolette. Some like the ability to open up a cordellete because an open cordellete without a welded double-fisherman's knot can be cut up more effectively for anchor material.

Following is a short video from the Canadian guide, Mike Barter, on how to tie a overhand bend.