"I want to ski Mount Baker."

Riding to the mountain and skiing it seemed reasonable to me. I'm not really much of a cyclist. I ride to work and use my bike for exercise sometimes. But I don't have tight bike shorts and it seems like everyone who does passes me on the road like I'm standing still. But even without speedy shorts, it still seemed like riding up to the mountain and skiing it was reasonable.

Doing it in a day however, seemed a little extreme.

But then Randall Nordfors arrived. Nordfords rode 58 miles from Bellingham to the Mount Shuksan Trailhead. He climbed the peak via Fisher Chimneys, then traversed over to Mount Baker, climbed the Park Headwall, and descended the Coleman Glacier. From the parking lot he rode back to Bellingham. His entire adventure was 33 hours and 29 minutes long. It involved 15 volunteers, four hired hands, and two-years of meticulous planning.

I'm no Randall Nordfors. I'm not that fit. Nordfors is a real athlete, a cyclist and a runner. I'm a mountain guide that bikes from here to there sometimes.

So I came up with my own plan, a plan that included no volunteers, and about an hour of planning. I wasn't going to do Baker on a bike in a day. Instead, I wanted to see what it would be like to do something a little easier. How about Ruth Mountain?

I've guided Ruth Mountain (or Mount Ruth) four times. It's a pleasant beginner peak with a small glacier on its flanks. But the views are absolutely stellar. The whole way up the mountain one can see Mount Shuksan. As you get higher, Mount Baker, Mount Slesse, Glacier Peak and the Northern Pickets all come into view. 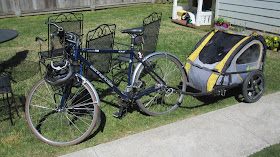 I rode from Bellingham to Glacier (approximately 33 miles) in about three hours. That felt like an okay speed with a heavy cart. I stopped in Glacier for dinner and then continued my journey up the highway. 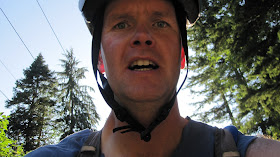 The first of many self portraits on the trip.

The next eighteen miles from Bellingham to the Hannegan Pass Trailhead were quite a bit slower. On that stretch I gained 2,500 feet. It took me two hours and forty-five minutes from Glacier to make the trailhead and my camp. The total approach on the bike was fifty-one miles and the total elevation gain was 3,000 feet. 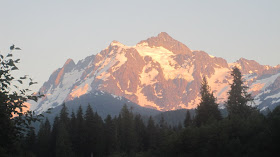 Mount Shuksan at Sunset from the Hannegan Road
Note: Click on Photos to see in larger format

I arrived at camp at about 9pm. I quickly put up my tent and went to sleep. The following morning, I woke up at 4am and was hiking by 4:15. 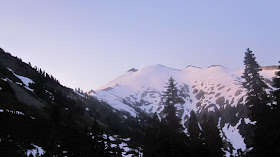 The first views of Ruth Mountain from the Hannegan Pass Trail. 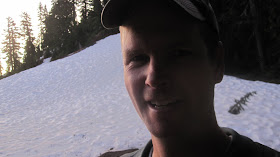 Another Self Portrait, this one at Hannegan Pass

In order to go faster on the trail, I elected to wear approach shoes until I reached the Pass. From there I switched into boots. 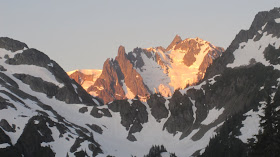 Mount Shuksan is one of the most photographed mountains in the world.
Here is a shot of the peak with the morning alpenglow. 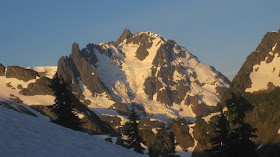 As the sun came up and I got higher, the views just got better.
The tower on the left-side of the peak is the Nooksack Tower.
The central glacier is the Price. And the steep slope on the right is the North Face. 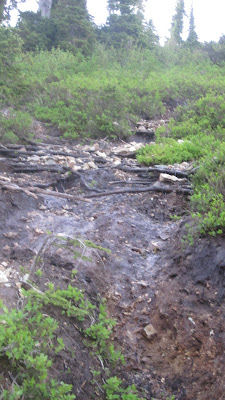 The ugliest part of an ascent of Ruth Mountain is the infamous Ruth Track.
This mud and root track gains 500 feet of elevation in a quarter of a mile. It is not pleasant. 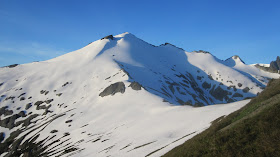 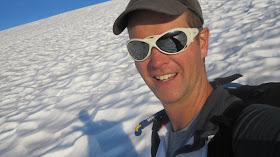 A Self Portrait Moving up the Mountain 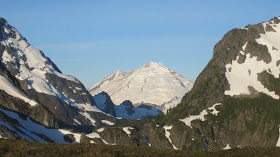 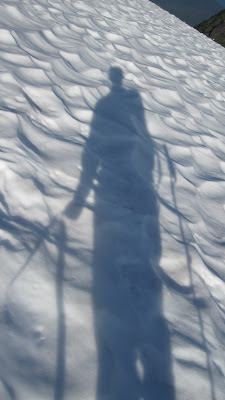 Me, trying to be artsy. 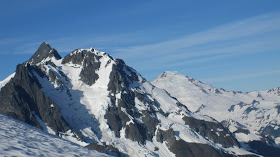 Mount Shuksan and Mount Baker from near the Summit of Ruth 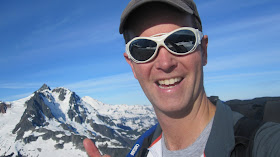 Me, on the summit!
After traveling 56 miles and gaining 7000 feet of elevation, I stood on the summit of Ruth Mountain at 8:15am. It took me exactly four hours from camp to summit the mountain.

The total time, without breaks and sleeping, from Bellingham to the summit was 9 hours and 45 minutes. I don't believe that this was any kind of speed record, but I was proud to have made the ascent. 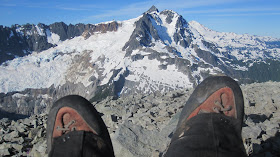 Relaxing on the summit. 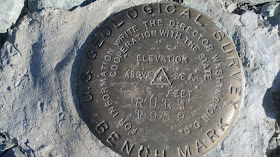 The Hannegan Trail in the late summer is extremely buggy. This helped expedite my descent. I was back at my bike by 11:00am. 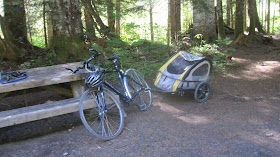 Repacked for the Ride Home

The ride home wasn't super fast. I took two longish breaks on the way home. I took an hour for lunch at a restaurant in Glacier and then another half-hour in Deming. I arrived at my house at approximately 5:30pm. The total time from house-to-house was 27 hours on the nose.

So this adventure was by no means as big as Mr. Nordfors'. But it was big for me. Prior to this, I'd never toured on a bike, pulling my gear and I'd never done any kind of dual adventure like that. So it was an experiment more than anything else. When I was done, I was definitely tired, but it was clear to me that I could have done a bit more too...

So skiing Baker in a day with a bike approach might be feasible. I'm just going to have to do more of this kind of stuff to find out if it's feasible for me...