Most leaders will do one of two things at the top of a route. They'll either build an anchor and lower off or they'll bring up a second to clean the route. It makes a lot of sense to bring up a second if you're going to continue up a multi-pitch line or if it isn't possible to rappel off.

In essence the leader who is stationed above the climber is working at a top-managed site. He is belaying the climber from above and is not top-roping. Most people only belay from above after they have lead a climb, but there are a number of situations where it is advantageous to actually top-rope from the top of a climb. 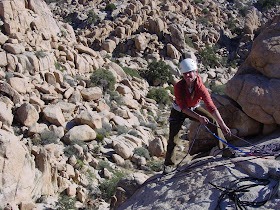 A Climber Belays from the Top
Photo by Jason Martin

Acadia and Ouray are both popular places where many routes require top-managment, climbers literally have little to no choice in many parts of these parks. Acadia is a climbing area situated on a series of sea cliffs. One can only access the crags by lowering down or rappelling down. Ouray is an ice park in Colorado. All of the routes are accessed from the top and most people lower in and then climb back out on a top-rope.

Most places don't require a top-managed set-up like the preceding examples. But there are many advantages to managing a crag from the top.

Value of a Top-Managed Site: 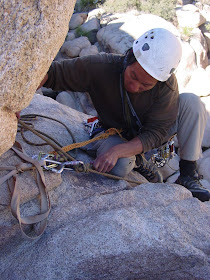 A Climber Lowers his Partner from a Top-Managed Site
Photo by Jason Martin
Disadvantages to a Top-Managed Site:
The most common way to access climbs in a top-managed situation is for the climber to lower down and then climb back up. Occasionally, a climber will rappel to the bottom and then climb back up, but this is not quite as safe as lowering. Lowering is safer because the belayer can check the climber's knot before he leaves.

This blog isn't to say that top-management is better. While it may be better in some situations, this article was actually designed to give you a quick taste of an alternative to regular top-roping. The best way to understand the strengths and weaknesses of such a technique is to experiment. Try top-managing at a crag you are familiar with for a day. It will be a very educational experience and will definately put another tool into your climber's toolbox.