How to Make a 3-Screw Anchor


Sometimes you want an extra screw for security. It could be because the ice itself is not that strong and you want another anchor point to add to the mix. It could also be that you only have shorter screws, which can sometimes leave you wanting another piece.

The process itself is quite similar to a 2-screw anchor. Place three screws in the ice, ideally about one foot away from the others. it is best to offset the screws a bit on both vertical and horizontal planes. Clip a carabiner to each screw, and clip in your anchor material. A triple-length sling or cordalette works really well with 3-screw anchors. 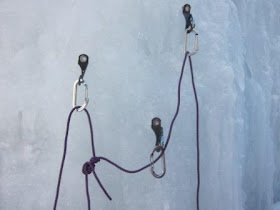 And then tie your figure-8 knot. Make sure to keep the cordalette's knot (the one shown in the upper left) away from the figure-8 knot: 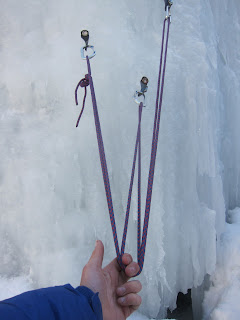 And clip in your master 'biner (always a locker): 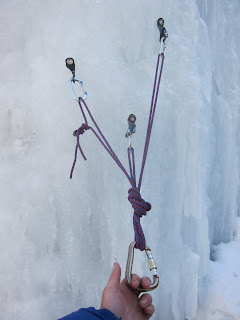 How to Make a V-thread and Screw Anchor

Sometimes you may want to add in a V-thread to your anchor. I use this especially in the summer on glaciers on Mt. Baker, where we toprope for hours in the hot July sun. Screws can melt out quite quickly in this case because they conduct heat. So I'll often make a V-thread to add to an anchor. Sometimes I'll even do an anchor with two V-threads, but I'll show just one V-thread and one ice screw: 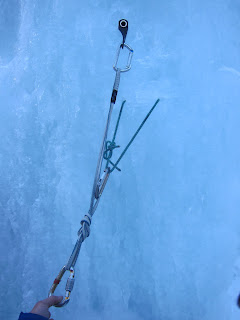 To make this anchor, do a V-thread (see a following blog for how to make V-threads) and put in a screw. Again, make the screw up and to one side of the V-thread. Clip a carabiner to each piece. Clip in your anchor material (shown is a 48" runner). Tie your figure-8 knot to create a masterpoint and clip in your master locker. Voila! A similar setup can be used to backup a V-thread for rappels. Stay tuned to the blog for more info about how to do this.