The Underappreciated Value of Trekking Poles

"I've never used 'em, so why should I start now?"We hear it at nearly every rendezvous before nearly every trip. Many people pride themselves on being anti-trekking pole. And it's not really clear why.Trekking poles can be your best friend. The use of the poles allows you to protect your knees while carrying heavy loads. They also help to preserve your balance on deep snow or in uneven terrain. Indeed, they provide so much support that I often argue that once you let your guard down and use poles, it's hard to go back to not using them...of course a handful of the stubborn will drop the poles for awhile after being "forced" to use them by a guide. But the value of said poles is so high, that even some of the most stubborn will eventually pick them back up again on their own private trips.While the advantages of trekking poles are clear, there are two potential drawbacks to them. Both of the drawbacks have more to do with the use of wrist straps than anything else. The first is that if you always use the strap, it is possible to develop tendinitis in the elbow, or tennis elbow. If you only use the wrist-strap when it's possible that you're going drop and lose the pole, then this impact can be limited. Without the strap, people tend to constantly change how they're holding the pole and as such, it doesn't impact the elbow so much. 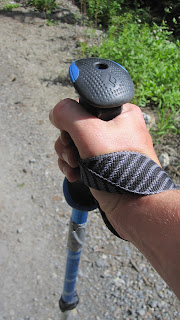 In both of the preceding pictures, the hiker could potentially fall and dislocate his thumb.


The second potential problem is what's referred to as "skier's thumb." This particular issue is also related to the strap. If you put your wrist into it and allow the strap to run behind your thumb as shown in the picture above, it is possible that a fall will dislocate your thumb. It is incredibly important to wear a wrist leash -- while hiking or skiing -- with it running from the top of your wrist. 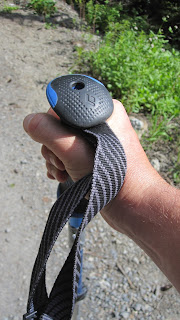 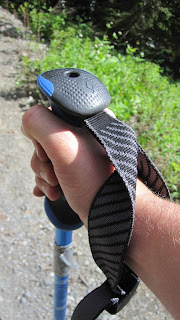 Both of the photos above show acceptable ways to hold trekking poles
without the possibility of injury.
The problems with trekking poles are very avoidable...and if you use them regularly, so are the problems that arise when you don't use them...--Jason D. Martin
Jason Martin at 6:00 AM