Lizzy N the Sky with Diamondz

I've been all over the country in the last three weeks. After an impromptu trip to NYC to do some hurricane disaster relief work (cutting down massive trees), I headed to Chicago for Thanksgiving then to Utah for some desert splitters.  I spent the majority of the fall last year climbing in Indian Creek and now I remember why.  World class climbing, great temps, $35 hotels with hot tubs.   After a long October in Seattle waiting for the rain to turn to snow, the desert sun was the relief I'd been waiting for.

Our friend, Dr. Sky took a break from the particle reactor at the lab in Los Alamos to meet us in Moab for some adventures in splittersville.  One of our objectives was the classic route, In Search of Suds (5.10+, III) on the impressive tower, Washer Woman.  It was a bumpy, uncomfortable 2 hour ride from Moab in Sky's 1980 something AWD honda civic.  He ensured us that his tires had cost more than his car and we wouldn't get stuck back there. 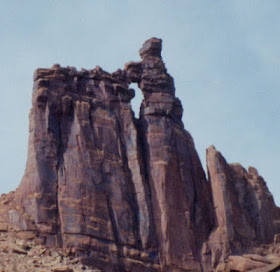 We finally arrived at the base and noticed another car.  Once we hiked to the top another team of three was just starting the 1st pitch. We were really worried that we would be benighted after waiting for them for an hour but decided to climb anyways, starting the climb at about 1pm.

I led p2, 5.10-, which started at the "window" and followed up a nice hand crack to off-width chimney with good pro in the back. 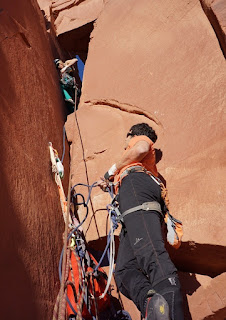 p3, 5.10+ led by the Dr. was a fun overhangy pitch with nice cracks and face holds reaching us above the Arch in the Washer Woman.  It was getting dark at this point and we decided to rally to the top as we see the other team start their rappel.

p4 was a easy 5.6 traverse above the arch

p6, 5.10+ A fun face climb that Sky leads.  A bolt ladder leads us to the top as the sun had long disappeared  behind the rusty orange desert plateau. 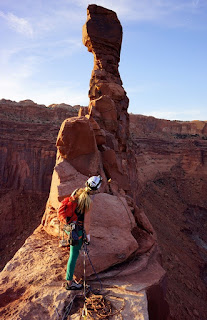 Liz, high on the Washer Woman

This was probably one of the most exciting rappels I've ever done.  It was a free-hanging rappel by headlamp through the giant arch.  We made it into town to find that the only place in Moab that serves food after 10pm was Denny's. 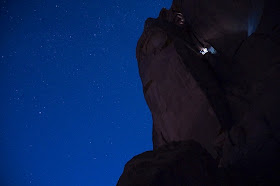 Rapping in the Dark

And so we finished the day the best way that we knew how, we gorged ourselves with nachos and grand slams.

Following is a short video that I made about the day out...

--Liz Daley, Instructor and Guide
Jason Martin at 6:00 AM