A number of years ago I was working one of our Alpine Mountaineering and Technical Leadership programs with Jonathon Spitzer. Jonathon no longer works for AAI, but we keep in touch. In any case Jonathon asked what system I liked to use to teach anchor systems. At the time I had a system that I thought was clever where I graded each individual piece in a student's anchor with a standard A-F style American public school rubric.

Jonathon asked, "have you ever used the 12-point system?"

I have used the 12-point system to teach anchor construction ever since that original conversation. I find that students understand this complex topic far more effectively when it is laid out before them in this way.  Following is a breakdown of the 12-point evaluative system:
With this in mind, consider the following pieces and how they might play into a 12-point system: 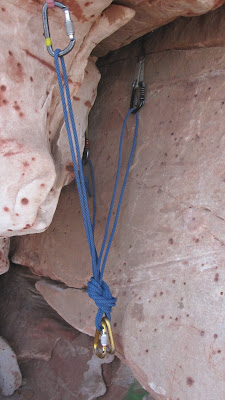 A simple three-piece  pre-equalized 12-point anchor in good rock
Note that you are not required to use lockers in the pieces and that these could have been non-lockers.

There are three additional pieces to this puzzle. The first is that the pieces must be good. In other words they have to be placed appropriately to achieve their full point status. The second is that the rock that the pieces are placed in must be good. If the rock quality is poor, you may have to subtract points.  And the third piece of the puzzle is that due to weird rock, flaring cracks or a lack of pieces that fit properly, you may not be able to build a 12-point anchor with three pieces. The rock may force you to use four, five or even six pieces. 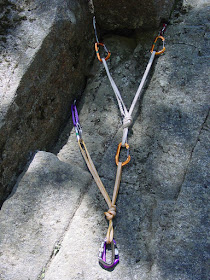 This is an anchor "in series." An individual may choose to use this kind of anchor
when there area lot of pieces in the system to obtain 12-points, but a cordellete
isn't long enough to link all the pieces together. In this photo there are
only three pieces, but there could easily be five, and they would be dealt with the
same way, by building anchors on top of anchors.

There are times in the alpine when it is not possible to build a 12-point anchor. In this circumstance you may only be able to fashion a four or six-point anchor. To do this, place a piece or two and then tie them off to your harness. Once you're tied in, you can use your body as a supplement to the anchor and then belay directly off your harness with a tube style device.

You should only build your body into a 12-point anchor if you need to do so for speed on a very big objective, or you cannot build a system that meets or exceeds 12-points. When you belay off your body it is difficult to escape the belay if anything went wrong...and if you're anchor is terrible, then a belay escape isn't really an option anyway.

There is only one magic bullet when it comes to building a good anchor, and that's experience. The concept of a 12-point anchor will provide you with a good foundation for anchor building, but to really feel confident, you're going to have to build a lot of anchors...