A couple of winters ago, something absolutely terrifying happened at a European ski resort. A German tourist in the Austrian Alps was "forgotten" on a ski lift. He went up for one last run before they were going to close down for the day...and before he got to the top of the hill, they actually did close for the day, leaving the man stranded.

The 22 year-old skier, who had left his cell phone behind, was stuck for nearly five hours in temperatures reaching 0 degrees Fahrenheit. The young man was finally rescued when a snowcat driver caught sight of him burning money in order to keep warm. 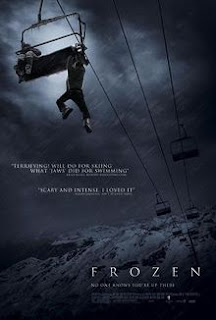 This real-life event was fortuitous for the makers of last winter's chill-thrill film, Frozen. The plot of the low-budget flick is almost exactly the same. Three friends get stuck high on a ski lift on a Sunday night after a New England resort closes for the week. Parker (Emma Bell), Joe (Shawn Ashmore) and Dan (Kevin Zegers) are left to try to find a way to get down or face the prospect that they will freeze to death.

The characters in this movie had a hard time thinking about how to stay warm. Joe, the lone skier in the group, never puts up his hood, no matter how cold it gets. Parker looses a glove early in the movie and then decides that it's a good idea to go to sleep on the ski lift with her hand wrapped tightly around the metal safety bar.

These are things that just wouldn't happen in real life. It's really hard to suspend disbelief when it's clear that the actors aren't really cold and have never really been cold. Nobody ever really shivers in the entire movie and the film-makers are far more interested in getting some gore out of the cold weather injuries than some reality.

The biggest problem of all with this film is that this is exactly the type of movie a low-budget production company could do very well. It is a tight and simplistic storyline that, when character driven, could be a tremendously engaging story. The problem here is that the characters are paper thin. They have nice back-stories, but they are just such dumbpeople, it's hard to really be engaged by them instead of by their situation. This is definitely one of those movies where you spend a lot of time yelling, "no! No! No! Don't do that!" And then you sigh and say, "that was a really stupid thing to do..."

All that said, this movie has one major thing working for it. It's the same thing that works in movies like, Open Water where a pair of scuba divers are left at sea by their tour boat, or in The Blair Witch Project, where a group of documentary film-makers become lost in a haunted forest...it's the what-would-I-do-if-I-were-in-this-situation factor. And Frozen is flush with what-would-I-do situations. The likelihood -- if you read this blog regularly -- is that you probably wouldn't do the same things that these not-very-outdoor savvy individuals did.

The characters in this movie are not bright and sometimes you do get angry at their choices. But that element, combined with the what-would-I-do element, keeps Frozen from being all bad...and in fact even makes it mildly -- and I stress mildly -- entertaining.