When you start to get cold, it's not uncommon for it to feel like your face, your ears, your hands and your feet are affected first. This is a reaction that everybody is predisposed too. As you get cold, your blood vessels constrict in order to avoid heat loss and the possibility of hypothermia. This allows areas of your body which are already cold to get colder. Ultimately, frostbite will occur in these extremeties.

Frostbite is the result of frozen skin and/or other tissue under the skin that becomes frozen. Naturally, this causes cell damage.

Three types of frostbite have been identified by severity. Like burns, they are listed as first degree, second degree and third degree. The following breakdown is from outdoorplaces.com

First degree, also called frost nip: Most people who live in very cold climates or do a lot of outdoor activity in the winter have had first degree frostbite (just as most people have had a first degree burn when they get a sunburn). Frost nip presents itself as numbed skin that has turned white in color. The skin may feel stiff to the touch, but the tissue under is still warm and soft. There is very little chance of blistering, infection or permanent scaring as long as it is treated properly.


Second degree, superficial frostbite: Superficial frostbite is a serious medical condition that needs to be treated by a trained medical professional. The skin will be white or blue and will feel hard and frozen. The tissue underneath is still undamaged. Blistering is likely which is why medical treatment should be sought out. Proper treatment is critical to prevent severe or permanent injuries.


Third degree, deep frostbite: The skin is white, blotchy and/or blue. The tissue underneath is hard and cold to the touch. This is a life threatening injury. Deep frostbite needs to be treated by a trained medical professional. The tissue underneath has been damaged, in sever cases amputation may be the final recourse to prevent severe infection. Blistering will happen. Proper medical treatment in a medical facility with personnel trained to deal with severe frostbite injuries is required to aid in the prevention of severe or permanent injury.


As first degree frostbite is common on expeditions or ice climbing trips, it is also common that it needs to be treated in the field. The most important thing with this mild frostbite is to rewarm the area. Rewarm the injured areas slowly and start working from the outside in. In other words, go toes to feet and fingers to hands. Extremities may be warmed under inside clothing or sleeping bags, arm pits or in the groin. Never rub or massage a frozen area. This merely rubs the ice crystals around on the delicate cell walls which causes additional injury and pain. Once it is rewarmed and thawed, it is very important that the area is not re-frozen. If the injury is re-frozen the severity of the injury will increase. 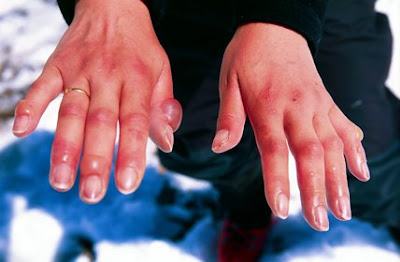 Unfortunately, treating second and third degree frostbite in the field is extremely difficult. Such cold injuries will require medical attention. 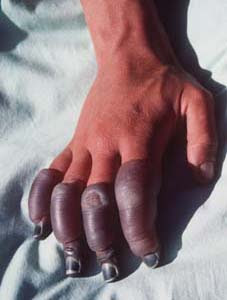 The reality of frostbite is that in most cases it's avoidable. Dressing right and paying attention to your body are two simple ways to avoid this debilitating and dangerous injury.