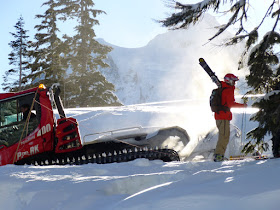 Everybody was psyched for the day.


On February 19th I finished a month on the road and returned to the Pacific Northwest, finally ending my journey just after midnight.  Contrary to expectations as I drove over Snoqualmie Pass, fueled by loud music and gas station coffee, the weather was not grey and misty.  Instead I was greeted by clearing skis, a half moon, and what appeared to be awesome snow conditions.  I pulled over and proceeded to bother every Northwest ski partner I could think of.  Finally my friend Boe up in Bellingham gave me the desired response and I made the extra hour and a half drive up I-5.  After a couple hours of sleep and more caffeine we got to the backcountry lot at Mt. Baker Ski Area.

Conditions were better than expected.


We started skinning out of the parking lot around 9am with the goal of heading out towards the Coleman Pinnacle, which is a high point along Ptarmigan Ridge.  After what seemed like a quick and easy skin we transitioned below Table mountain. Our planned route took us under the south face of Table and we were glad to be crossing this slope early in the day. 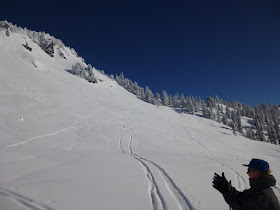 ﻿﻿﻿We continued to traverse out towards the Coleman Pinnacle with great snow conditions.  Snow on north aspects had faceted throughout the night creating some pretty good skiing conditions.  In order to take advantage of these conditions we decided to sneak in an extra run on the way to the Pinnacle.  While my legs did not thank me at the end of the day, it was worth it.

After some of the better skiing I have had in a while, we put skins on, enjoyed some lunch, and continued on towards the Pinnacle.  ﻿ Eventually our objective was in sight. 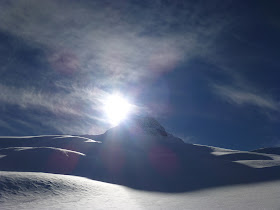 Getting to the top was steeper than expected and we were forced to work on our bootpacking skills. Notice Boe's upside down ski pole handle anchor technique. 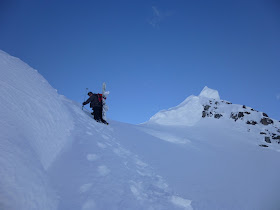 Skinning off the top of the Pinnacle has been something I've wanted to do for a while and conditions were great.  After some steeper rolls on the upper ridge we were able to drop into the north slope we skinned/booted up.
Lower down on the slope that we booted up we had a concern about wind loading.  We were able to ski cut a small roll which produced a small wind slab.  Ski cutting is a rather advanced technique, make sure you have the proper instruction before attempting it in the field.

After some more stellar skiing we began the long haul to the Herman Saddle.  Due to dwindling energy and battery power my propensity to shoot photos declined but Boe was able to motivate and take some stellar shots of the sunset.


The ski from Herman Saddle to the car was pretty brutal.  The sun had its way with much of the slope and except for a couple hidden stashes of decent snow, it was a bone jarring ice fest back to the car.

Overall it was a great first day back in the northwest.
--Dustin Byrne
j at 6:00 AM