Surprisingly, there is one mistake that both beginners and advanced climbers alike tend to make. Many people will wrap a tree with a sling and then clip the sling. Often the sling is wrapped around the tree in such a way that it is loading the carabiner improperly. A carabiner that is loaded from three directions is often referred to as being triaxally or tri-directionally loaded. This is very very bad... 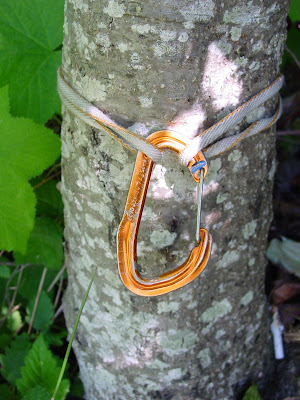 In this photo the carabiner is radically tri-loaded.
An impact on such a carabiner could cause failure.

A tri-loaded carabiner is crossloaded. It will not hold a high impact fall. As such, it is important to use slings that are long enough to tie off. In the preceding example, there is not enough sling material to get all the way around the tree, but even if there was enough for the carabiner to hang more loosely, it could still triaxally load it.

One could tie the sling off with a pre-equalized knot, but this isn't required. The following photo shows one quick example of a tie-off that eliminates the possibility of triaxal loading. 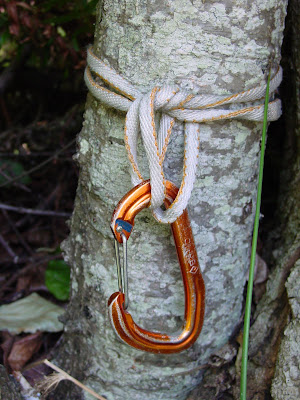 Triaxal loading is a detail that a lot of climbers don't think about. But it is just these kinds of minor details that can get you in the end. The phrase, "the Devil's in the details," didn't come from nowhere.