In the Company of Ticks

As the weather warms, it feels surreal as I step out of my winter dreams of warmth and into a bright sunny reality. I love wearing shorts on approaches... But as it warms I cannot rid myself of the feeling that some little bloodsucker feels the same spring euphoria as I when he sees my bare white calves approaching.

Now I don’t want to sound like some kind of entomophobian (yes, there actually is a word for fear of insects), but lets be honest, nobody enjoys cavorting with these little monsters. So if you're like me and want to avoid ticks this summer, here are some tips, tricks and general info about these crazy arachnids. 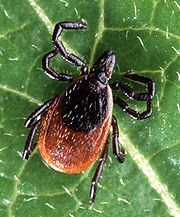 Ticks are viscous little creatures. They've figured out that since they can't jump or fly, the best way to get their vampire on is to wait in brush, tall grass, and bushes along deer and human trails. Some ticks have even developed the “oh-so-not-cool” move of falling out of trees and onto an unsuspecting host.

Once they have reached their delicious meal, ticks will insert a barbed feeding tube into the host to secure themselves in place while they feed. This blood feast can last from a few hours to several days. Once satiated the creepy little parasite will drop off and hide while it spends some time digesting your blood.

While the tick is stuck to the host it might feel guilty about taking so much away and thus want to give a small poisonous “present” in return. These presents are numerous as ticks are capable of transmitting a variety of diseases, the most common of which is a fun little thing called Lyme disease. If you are one of the lucky 1% of all tick bite recipients to contract Lyme disease, you will know in anywhere from 3 to 32 days after being targeted by the creature. The present will start off as a headache with fever, fatigue, depression and a bulls-eye shaped rash around the bite mark. If at this point you decide that you don’t want to keep this gift, you will not be able to return it to the tick, (besides that would be rude). Instead, you will need the help of a doctor and his antibiotics, which in most cases will rid you of the disease.

However, if you decide that you would rather keep the bloodsucker's gift, then you will begin to contract chronic problems as the disease attacks your organs, especially the brain, heart, and bone joints. The longer that you wait to get treated, the harder it will be to treat the disease. In an extreme case Lyme disease could lead to a permanent paralysis.

Luckily though, there are ways to prevent ticks from getting to skin level. When playing in popular tick habitats (pretty much any wooded or forested area in the world), one should wear long sleeved shirts, pants, and a hat. Another trick is to tuck your pant legs into your sucks so as to look like such a dork that the tick will be embarrassed to be seen on you (it also will prevent them from crawling up your boots and socks into the promised land).

However, even with the best of defenses, the ticks still might find their way through and therefore it is good to do a thorough tick check a few times a day while paying special attention to the warm places of your armpits and groin. It's also a good idea to check your pets over to make sure that they haven’t become a blood buffet.

If a tick is found, then the best method of removal it is use tweezers. Pull in line with the creatures body and it's entrance hole while holding it its body as close to the head as possible. Be careful and move slowly; as much as you might hate these guys, the last thing that you need is for one's head to pop off while beneath your skin.

Following are two videos which show methods of tick removal. The first shows the use of a forceps and the second discusses a number of tick related issues before demonstrating removal.

Ticks are gross, but good prevention and treatment will keep them from being anything more than a major nuisance.