A Season of Living and Working in Antarctica - Part III

This last winter, AAI Guide Alasdair Turner spent the winter working and living in Antarctica. This week our blog will feature a special three-part series on Alasdair's experiences...

Emperor Penguins are just one of the many things being researched around McMurdo Station.

There are several reasons for the United States to have permanent stations in Antarctica. The first and most commonly mentioned is that they are a station for science to take place. This is true, and yes lots of science does take place at these stations. There are other reasons for the United States to have such a large presence in Antarctica also. One is that the United States and every other nation who has a presence wants to have a presence. It should be looked at as a bird in the hand scenario. To be building stations in Antarctica is to stake a claim of part of the continent if the Antarctic treaty were to ever collapse. Having the biggest presence on the continent, the United States sees itself as a defacto enforcer of the Antarctic treaty. The Antarctic Treaty says that a countries presence on the continent must have a scientific purpose, so the United States throws a lot of money at science in order to keep its presence in Antarctica, or the United States has a large presence in Antarctica because the believe that scientific research on the southern most continent is very important. As far as I am concerned the reasons don't matter. What matters is the United States and the National Science Foundation is a leading the way in funding some amazing scientific projects and living and working along side the people doing this research is one of the best things about being in McMurdo. I could not possibly do most of these projects justice by trying to describe them on this blog, but what I have done is posted some links to information about some of the groups I know about some of whom I worked with, some whom I talked with and some whom I never met at all. This is a very brief list. There were many more projects last season. 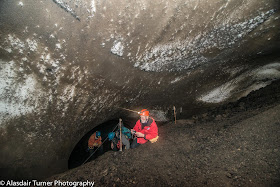 Sampling deep inside a steam cave on Mt. Erebus, Antarctica. 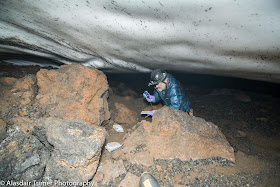 Thermal imaging is used to find the hottest areas of soil.

WISSARD Project:
Wissard is a project that is drilling 800 meters through the Antarctic ice to investigate and sample water and sediments underneath.
http://www.wissard.org

Weather
Antarctica is cold, but you probably already knew that. What surprised me was just how cold it can be. After doing seven climbing trips to the Denali area I did not think the cold would be that much of an issue. It is. It can be an issue for everyone and everything we do. It is so much colder than anywhere else I have ever been that I was a little surprised by it. I arrived in McMurdo on October 1st. October is a pretty cold month, but it starts to warm up quite fast as the 24-hour day light gets closer. December can actually be quite warm and I found myself walking around McMurdo in a t-shirt on numerous occasions. Keep in mind by warm I mean close to freezing. Due to the dry air and the solar radiation a temperature close to 0 degrees C can feel quite warm if the wind is not blowing.

There is a daily weather forecast at McMurdo which is about as accurate as one might think(not really).
Unlike the US, Antarctica does not have that many weather monitoring stations so figuring out what is happening with weather a day or two out can be difficult. If stationed at a field camp it is possible to call into McMurdo to get the forecast for your camp but the inevitable answer from the weather folks comes in the form of the question "well, what is it like there now?"
There are three categories of weather in and around McMurdo:

Condition 1Windspeed over 55 knots (60 miles per hour)Visibility less than 100 feet (30 meters)Wind chill below −100 °F (−73 °C)Description: Dangerous conditions; outside travel is not permitted.

Condition 3Windspeed below 48 knots (55 miles per hour)Visibility greater than 1/4 of a mile (402 meters)Wind chill above −75 °F (−60 °C)Description: Pleasant conditions; all outside travel is permitted.

At no time in my five months on station did I experience a condition 1 at McMurdo. I did experience weather that would fit into that category while on Mt. Erebus however.

Antarctica is dry. Very dry. Most people think because there is a lot of snow and ice that it must snow a lot. It does not. Most of antarctica is considered a desert. Most of the snow McMurdo Station gets is from ocean moisture. The air is very dry and sleeping with a humidifier in dorm rooms is very common.

Antarctica is pretty windy. It is notorious for its winds, however winds in McMurdo are often not too bad. McMurdo does not get the catabatic winds that many other places do. Winds are fairly common out on the ice shelf where we teach our happy camper courses. Wind makes it feel colder, and makes it more likely you will get frostbite.

I was lucky enough to be out at the Scott Base pressure ridges when a storm was rolling in. Major storms usually come from the south.

A storm rolls across the ross sea toward McMurdo Station.

Fata Morgana stretches the base of the Royal Society Mountains.

The Erebus glacier tongue is the end of the Erebus glacier that comes off Mt. Erebus. The glacier tongue floats on the ocean and extends a couple of kilometers from land. Due to the constant glacial movement of the tongue pushing out to sea, the sea ice around it contains several cracks that are often challenging to deal with. This makes it a perfect place to teach the field sections of sea ice courses. It was during one of these courses that we noticed a small hole in the wall of the glacier. The next day while conducting some sea ice monitoring we dug out the hole to find an incredible cave. This cave and others like it, are formed when crevasses in the glacier become covered by snow bridges. The surface melt water then percolates through the roof creating icicles. These caves are often used as a recreational outing for the people in McMurdo Station, but this year a lack of suitable vehicles to transport people, in addition to other things meant that very few people would be allowed to see this amazing natural wonder. 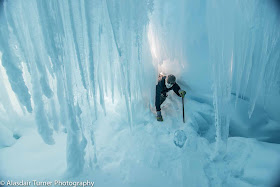 Entering the ice cave for the first time. 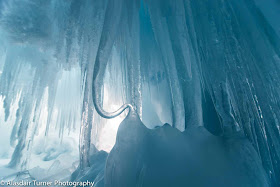 Some features are beyond explanation. I would love to know the dynamics behind the formation of this icicle. 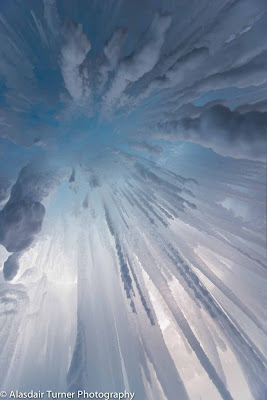 Looking up at the roof. 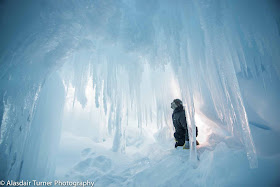 This photo was featured on National Geographic Travelers Photos 365. 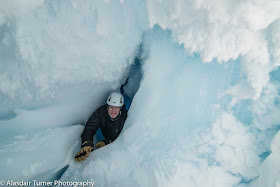 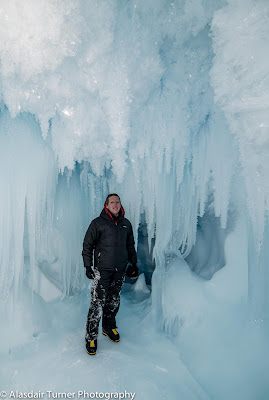 Me enjoying the inside.

Alasdair Turner, AAI Instructor and Guide
Jason Martin at 6:00 AM