The Murder of the Impossible

In 1971, Reinhold Messner was already a well-known alpinist. So when he wrote an essay that became one of the most heavily quoted and debated pieces of writing in climbing's history, people paid attention. In 1971, Messner wrote, The Murder of the Impossible. 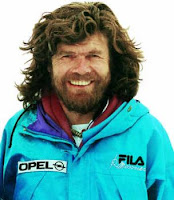 Messner became one of the most well-known alpinists in the world after he became the first person to summit Mount Everest without oxygen in 1978 and then the first person climb all fourteen 8000-meter peaks in 1986. These accomplishments culminated to make him an important voice in the world of climbing. It also served to keep his essay alive and under constant scrutiny.

Following are a series of select incendiary quotes from the essay. Some of the most quoted parts have been highlighted:

Expansion bolts are taken for granted nowadays; they are kept on hand just in case some difficulty cannot be overcome by ordinary methods. Today's climber doesn't want to cut himself off from the possibility of retreat: he carries his courage in his rucksack, in the form of bolts and equipment. Rock faces are no longer overcome by climbing skill, but are humbled, pitch by pitch, by methodical manual labor; what isn't done today will be done tomorrow. Free-climbing routes are dangerous, so the are protected by pegs. Ambitions are no longer built on skill, but on equipment and the length of time available. The decisive factor isn't courage, but technique; an ascent may take days and days, and the pegs and bolts counted in the hundreds. Retreat has become dishonorable, because everyone knows now that a combination of bolts and single-mindedness will get you up anything, even the most repulsive-looking direttissima.


Times change, and with them concepts and values. Faith in equipment has replaced faith in oneself; a team is admired for the number of bivouacs it makes, while the courage of those who still climb "free" is derided as a manifestation of lack of conscientiousness.


Who has polluted the pure spring of mountaineering?


"Impossible": it doesn't exist anymore. The dragon is dead, poisoned, and the hero Siegfried is unemployed. Now anyone can work on a rock face, using tools to bend it to his own idea of possibility.


Anyone who doesn't play ball is laughed at for daring take a stand against current opinion. The plumbline generation has already consolidated itself and has thoughtlessly killed the ideal of the impossible. Anyone who doesn't oppose this makes himself an accomplice of the murderers.


I'm worried about that dead dragon: we should do something before the impossible is finally interred. We have hurled ourselves, in a fury of pegs and bolts, on increasingly savage rock faces: the next generation will have to know how to free itself from all these unnecessary trappings. We have learned from the plumbline routes; our successors will once again have to reach the summits by other routes. It's time we repaid our debts and searched again for the limits of possibility - for we must have such limits if we are going to use the virtue of courage to approach them. And we must reach them. Where else will we be able to find refuge in our flight from the oppression of everyday humdrum routine? In the Himalaya? In the Andes? Yes certainly, if we can get there; but for most of us there'll only be these old Alps.


So let's save the dragon; and in the future let's follow the road that past climbers marked out. I'm convinced it's still the right one.


Put on your boots and get going. If you've got a companion, take a rope with you and a couple of pitons for your belays, but nothing else. I'm already on my way, ready for anything - even for retreat, if I meet the impossible. I'm not going to be killing any dragons, but if anyone wants to come with me, we'll go to the top together on the routes we can do without branding ourselves murderers.


So fifty years later, we have to ask whether or not the impossible has been murdered? Has the advent and popularity of sport climbing changed the way that we think of climbing? How about aid climbing? What about mixed climbing? We've seen ascent after ascent over the last few years that required such a high level of commitment and technical ability, that it's hard to say that the impossible has been murdered. I mean, think of Alex Honnold...

On the other hand, imagine a route up a blank rock face where every four feet there is a bolt. Anybody could climb such a route using aid techniques. This would definitely fit into Messner's description of the murder of the impossible. But now imagine that same route with a bolt every seven feet. There might be climbers out there who could climb such a route and then again there might not...

Most climbers don't think about whether or not they are murdering the impossible with their techniques. Most are just out there to have a good time and maybe do something cool.

The reality is that the introduction of 5.15 into the grade system and wild expeditions to the edges of the Earth continue to show us that every generation of climbers has a new "impossible" to overcome. As long as we continue to follow the ethics of a given area or range, meeting the impossible on its own terms will always be possible...