Every year I say something like, "this was the best Red Rock Rendezvous ever!" And every year I'm right. In the 11th year of the event's history, it was undoubtedly the best ever. We had more guides on site than ever before. There were twenty-three of us there. And Mountain Gear, the main sponsor of the event, pulled out all of the stops to create an absolutely fabulous festival. 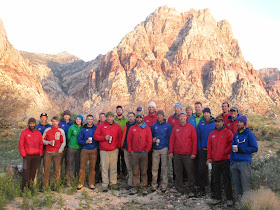 The AAI Guide Staff on the first morning of the event.
(click for larger pictures)

This year was the second year that we have offered multi-pitch climbing at the event. Every day four guides took eight people in two shifts up multi-pitch lines in First Creek Canyon. RRR participants got to climb things like Algae on Parade (5.7, II), Lotta Balls (5.8, II), and Black Magic (5.8, II). 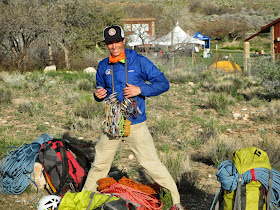 Jeremy Devine getting ready for the first clinics of the day. 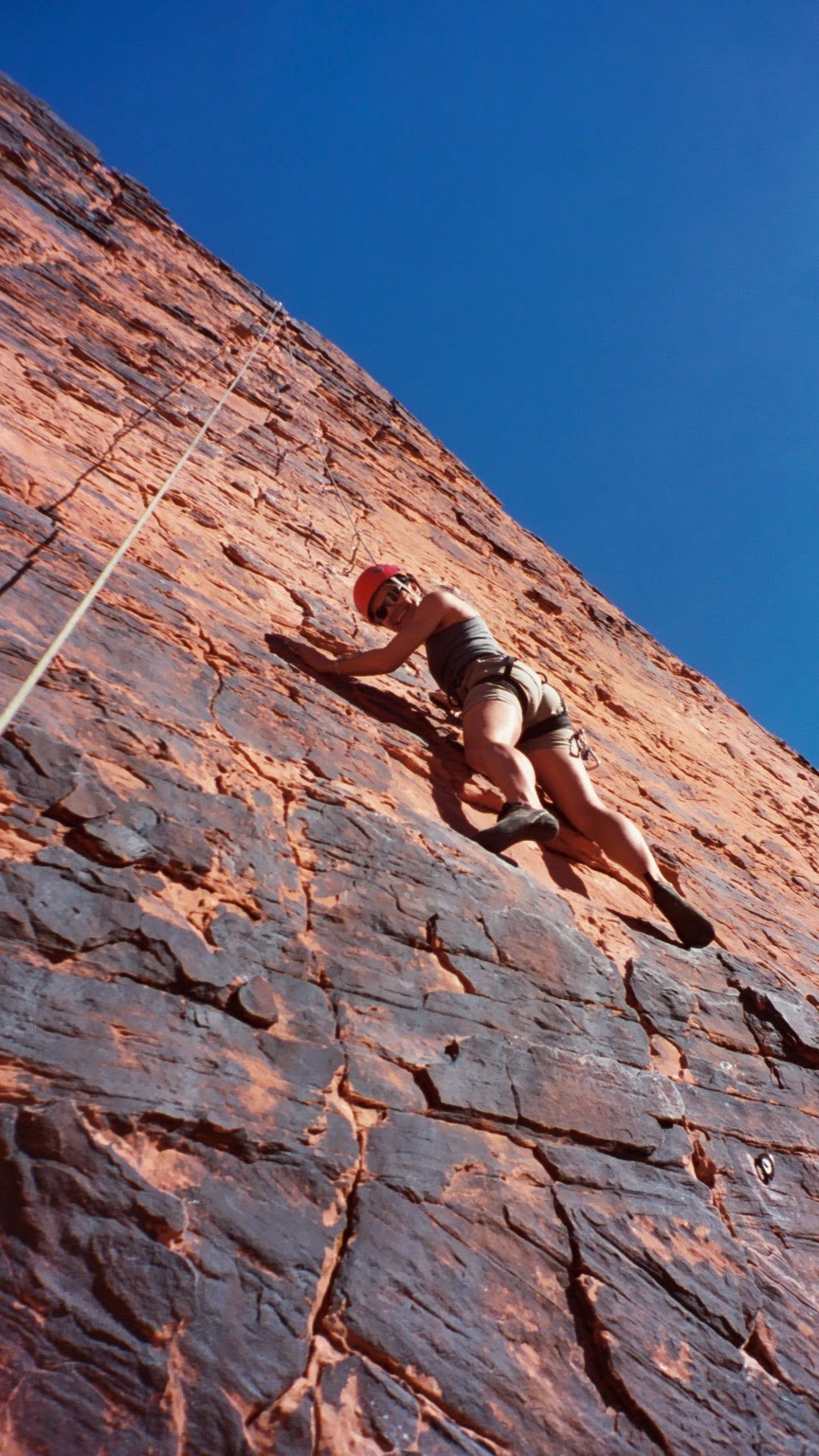 A beautiful day for climbing at Red Rock Rendezvous. 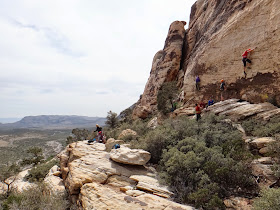 More climbers in the field (photo by Andy Stephen)

As the guides aren't all together very often, there was a bit of a competitive spirit on the first day. Late in the evening, spurred on by free Fat Tire beer, AAI Guide Paul Rosser and I got into a rope coiling contest in the parking lot. It was loud enough that the security guard came over to see if there was a fight.

What he found was probably a bit out of his normal experience, a bunch of guides coiling ropes and yelling at one another that we're playing by "prison rules." I think a climbing festival is the only place in the world where "prison rules" and rope coiling go hand-in-hand... 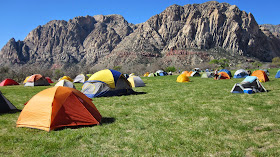 Camping at the event. 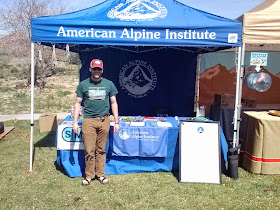 Casey at the AAI Booth 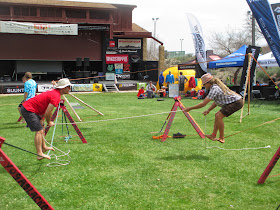 These guys were playing tug-of-war on the slack lines.
Obviously they were crazy good at slacklining.

The fairgrounds for the event are at Spring Mountain Ranch State Park. The ranch is a historic place with an outdoor theatre. And there is tons of room to play in the grass and hang out.

On the first day of this competition I came in third place, and the guy in the video below came in first. You can see my time (I'm J-Mar) on the whiteboard at the end of the video.

The thing is that this video was taken on the second day of the competition, and it turns out that if you win on one day, you don't get to compete again. So I eventually got ahead and felt like I had a solid time.

The problem was that the people running the competition decided to play a little practical joke on me. Phil Bridgers, the event coordinator and a good friend of mine, put his name up on the board with a faster time. Every time I beat his time they changed Phil's time to be a bit faster.  I would go over to the table and do my best to get one or two seconds faster, then they would do it again. Finally, they couldn't help themselves and they started to laugh.

"I've never played that game in my life," Phil admitted. And I had to admit that it was a pretty good joke too. Especially since I won the draws. 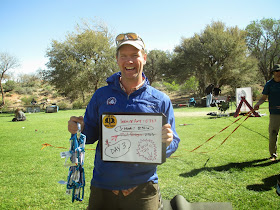 The final winner on the second day of the draw competition with a time of 32.6 seconds.

There was another game that we at AAI sponsored at our booth. Casey had people compete to build an pre-equalized anchor off of three-points, finishing with  two opposite and opposed locking carabiners. Whomever did it the fastest would win a $600 course credit from the American Alpine Institute.

Though I obviously wasn't eligible to win the contest, I played it anyway to see what my time would be. After figuring out all of the tricks, I got my time all the way down to 11.56 seconds. But then a young woman who'd never built an anchor before came along. She was super dexterous and blew away all the guides and non-guides alike with a final time of 10 seconds flat. And with that she's signing up for a course with a significant discount.

In the end over four hundred people took climbing clinics at the Rendezvous, nearly a thousand participated in the parties and competitions at night. There is no doubt in my mind that the Rendezvous is the best climbing festival of the year. I can't wait until 2015!!!