What's Wrong with this Picture?

Most climbers begin their career by toproping.  If you're reading this blog, it's likely that you've toproped before.  So I'd like to try something new with this blog.  I'd like to ask each of you out there in the dark corridors of the internets what you see wrong with each of the set-ups in the following pictures.

Don't jump ahead to the answers. Just see what you think. If you're really good, you'll write down all the things that you think are wrong before scrolling down to see if you were right...

Picture #1 -- This first photo was taken at Barney's Rubble in Leavenworth.  What's wrong with this picture? 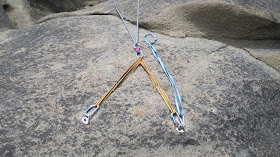 Picture #2 -- This second picture was taken at the top of a sport route on the Aquifer Wall in Red Rock Canyon. What's wrong with this picture? 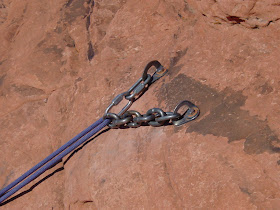 Picture #3 -- This last picture was taken at the top of a route at Mount Erie.  What's wrong with this picture? 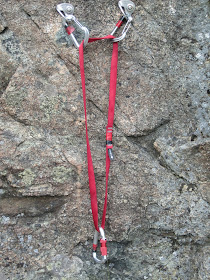 So there are three pictures of toprope anchors that may or may not be problematic.  Write down your answers and then look below...

This first anchor is a mess.  Here is a quick breakdown of the problems:
Picture #2:
Picture #3: