--A 46-year-old Bellingham climber was killed by a rockfall in North Cascades National Park on Sunday, the park service said Tuesday. The rockfall occurred in the Fisher Peak area near Easy Pass. Denise Shultz, public information officer for the National Park Service, told the Bellingham Herald that Eric Moldver was hiking Sunday, his 46th birthday, with a group in a steep area on some loose rock when a boulder fell from above Moldver and hit him on the head. To read more, click here.

--A section of Highway 20, the North Cascades Highway, is currently closed. For more information, please see the following:

It is closed on the west side just above the Goodell Creek put-in for rafts. At this time it is possible to put in at Goodell but that could change at any time due to wind direction and fire activity.

Please look for updates at the following websites... 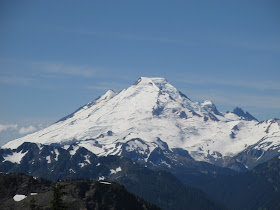 --Search and rescue responses are up 40% in Mt. Rainier National Park. To read more, click here.

--An uninjured rock climber was rescued in Tillamook, Oregon over the weekend. To read more, click here.

--Two minors were killed early Friday morning when a limb from an oak tree fell on their tent at Yosemite National Park, park officials said. The incident took place around 5 a.m. local time at the Upper Pines Campground in Yosemite Valley. Park spokesman Scott Gediman declined to release the ages or any details about the two to the Associated Press, describing them only as under age 18. To read more, click here.

--Officials at Yosemite National Park closed the Tuolumne Meadows Campground on Monday after two squirrels contracted and died of the plague near the area. Park employees will use the closure to spray flea-killing insecticide into burrow holes where rodents live. Rodents like rats, chipmunks, and squirrels carry the fleas that carry the plague. To read more, click here.

--The Tioga Pass Road between Highway 395 and the Yosemite National Park Entrance re-opened over the weekend. No stopping is allowed along the eastern six miles of the road. This will be strictly enforced. The fire remains active to the south of the road and this is essential for firefighter and public safety. To read more, click here.

--Escorts are being provided to those who need to get to campsites evacuated on the Tioga Pass Road. To red more, click here.

--AAI Guides Doug Foust and Tracy Martin helped the BLM in Red Rock facilitate a day of climbing for two children who lost their father in the Iraq war. The event was covered by local media. To see a video and read an article about the event, click here. And here. And here.

--With a narrow window of opportunity, the Access Fund secured temporary ownership of a critical access point to The Homestead in central Arizona to save the area from indefinite closure. With over 250 sport climbs on 12 limestone walls, The Homestead is one of the best winter limestone climbing areas in the country, boasting true “tufa” sport routes. But in 2014, access was imminently threatened when the bank foreclosed on a piece of private property that overlapped key portions of the access road, trailhead, and first few dozen routes. If sold to a non-climber-friendly buyer, access to the entire Homestead area could have been lost. To read more, click here.

--In June, the Grand Canyon was named one of the “Most Endangered Places” in America by the National Trust for Historic Preservation. But the designation came just two months too late to possibly influence U.S. District Court Judge David Campbell. In April, he denied a request by the Havasupai tribe and a coalition of conservation groups to halt new uranium mining next to Grand Canyon National Park, just six miles from the Grand Canyon’s South Rim. To read more, click here.

--The Colorado Avalanche Information Center would like to add another forecaster. To learn more about this job opportunity, click here.

--This winter, Vail Resorts is trying something different on its ski slopes:Crowdsourced, real-time wait times for ski lifts offered via smartphone app. Vail Resorts says that an update to its EpicMix smartphone app will collect data from the RFID-enabled season passes skiers carry at the resort. It’s one of the most ambitious efforts yet to bring Waze-style crowdsourced location data into the sports and vacation spheres. To read more, click here.

--The Access Fund and the American Alpine Club are proud to announce a joint grant program available to local climbing organizations and anchor replacement groups seeking funding for fixed anchor replacement at climbing areas across the United States. By partnering on this program, the nation’s two national non-profit climbing organizations are filling a need unmet by their existing climbing conservation grants—replacing fixed anchors at local crags. This grant program is made possible by corporate support from ClimbTech, Petzl, and Trango. To read more, click here.

--Uli Steck just completed all 82 4000-meter peaks in the Alps in 61 days. His victory wasn't without tragedy though. One of his partners - Martijn Seruen - was killed in a fall. To read more, click here.

--After buying Park City Ski Resort in Utah for $182.5 million, Vail is now now connecting Park City to The Canyons (which Vail already runs) to create the largest ski resort in the USA at 7,300+ acres. The new ski resort will simply be called “Park City” but the old canyons infinity symbol will live next to the name in the logo. To read more, click here.

--The New York Times reports on the "culture clash" taking place in the backcountry between people shooting guns and other backcountry users. To read the article, click here.

--And finally, we all have to have hobbies. I guess. These guys love to ski down escalators in Salt Lake City shopping malls: