--A Vancouver climber has lost his life after a tragic fall on Monday near Revelstoke. According to Revelstoke RCMP, 61-year-old Carl Douglas was negotiating a steep incline in Glacier National Park when the piece of rock he was holding on to broke away from the rock face causing him to fall. To read more, click here.

--Bellingham Mountain Rescue had a busy weekend. First, they assisted a team that was lost in a whiteout on Mt. Baker. And second, they assisted an individual who had a lower leg injury on the same mountain... 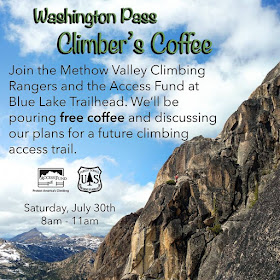 --There will be a Climber's Coffee event at the Blue Lake Trailhead in Washington Pass this weekend. For more info, click here.

--A new Viggo Mortensen film features the mountains of the Pacific Northwest. Many of the scenes of the new film were shot at Artist Point with Mt. Shuksan and Mt. Baker in the background. To read more, click here.

--Sequoia and Kings Canyon National Parks, CA –The body of missing hiker John Lee, a 68-year-old male from Mentone, CA, was spotted by helicopter in Sequoia National Park at the base of the southwest slope of Mt. Whitney (approximately 12,500 feet in elevation) on Sunday, July 24, 2016, at approximately 1:35 p.m. To read more, click here.

--A dehydrated climber was rescued in Zion National Park this week. To read more, click here.

--Last weekend the Access Fund policy team, along with the Access Fund executive director and the Access Fund Native Lands coordinator, spent 3 days meeting with local climbers and elected officials, discussing climbing management with Secretary Jewell and other land managers, and listening to the spectrum of concerns shared by local stakeholders including the Native American community. This official Public Listening Session helped to further inform our understanding of the complex issues associated with protecting the Bears Ears region, and also provided Access Fund the opportunity to voice our ideas on climbing access and conservation to top-level policy makers. To read more, click here. 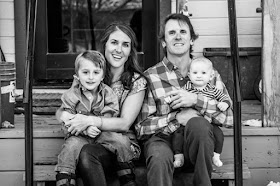 Gary with his wife and small children.

--Gary Falk, a well-known and well-respected climbing guide, died in a fall in the Tetons over the weekend. It appears that Gary was trying to retrieve a stuck rappel device when he fell. The device had been used by one of his participants and was being pulled back up. The device got stuck and Gary unclipped to get it. That's when he fell. To read more, click here. Tragically, Gary is survived by his wife and two young children. There is a go-fund-me site up to help support Gary's children, here.

--Authorities say a woman has died after a 60-foot fall in central Utah's Maple Canyon. There is limited additional information about this available. To read more, click here.

--There have been a couple of bear attacks in Alberta, Canada. To read more, click here.

--It can be tough to pinpoint the moment a burgeoning subculture makes the evolutionary leap to mainstream relevance. But in the rapidly expanding industry of high-end climbing gyms, anthropologists might one day look back and deduce that the moment arrived on August 25, 2015, the day Brooklyn Boulders inked an investment deal with New York private equity firm North Castle Partners. The amount: $48,750,000. "There’s only so many ways to grow a company. You can try and hold onto it yourself and go slowly or organically. Or you can try to make something crazy happen," says Lance Pinn, the 31-year-old co-founder and CEO of Brooklyn Boulders (BKB). Pinn won’t specify what the terms of the deal are—just that he’s working on building the first national climbing gym brand. "We wanted to take on investment that fits our growth timeline rather than waiting 20 years or however long it would take to expand in a meaningful way,” Pinn says. To read more, click here.
Jason Martin at 6:00 AM