No, instead, it is film called Whiteout.

U.S. Marshall Carrie Stetko (Kate Beckinsale) is an isolated law enforcement officer. She works at a U.S. base in Antarctica. And she is a mere three days away from retirement when everything goes awry. There is a murder, the first murder on the continent. There is a wacko who wields an ice tool. There is a doddery old doctor (Tom Skerritt) who is far too easy to peg as being involved. And then there's the weather, which performs as a character in and of itself.

The piece opens with a Soviet plane going down over the arctic. Somewhere on-board there is some kind of valuable cargo, cargo that someone from a U.S. Antarctic base would be willing to kill for fifty-years later. The rest of the movie is a somewhat fast-paced ride into the antarctic wilds as Carrie Steko peels back the layers in order to find the murderer.

Unfortunately, the first time we meet Beckinsale's Steko, she is stripping down to take a shower. Apparently the filmmakers believe that the best way for an audience to take a female protagonist seriously is to get her to show some skin first. The filmmakers are, of course, wrong. An introduction to a strong female character like this is completely undercut by sexualizing her before we really get to know her.

The film just goes downhill from there. We know who the killer is because there are so few characters. There are no real surprises throughout the entire piece.

The story, which was originally a graphic novel by Greg Rucka and Steve Lieber, isn't too bad. Instead, it was the way that the story came together that made the entire experience bad. Brothers and writers Jon and Erich Hoeber and Chad and Carey W. Hayes, took the graphic novel and created clunky dialogue and completely ludicrous situations. Director Dominic Sena (Swordfish and Gone in Sixty Seconds) didn't help.

It would have been good if someone in that very large crew had gone outside into a cold environment at least once... 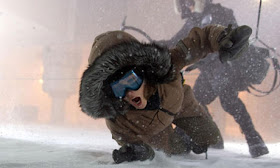 Most of the shots in the film are like this. They look like they are all inside a studio.

There was one wonderfully ludicrous sequence that took place as the arctic winds rose. The team engaged in a pitched battle with ice tools and handguns while clipped to fixed lines. The winds were so extreme that individuals not clipped to the lines would be blown out into the whiteout.

It was odd that so many of the characters were so versatile in the action sequence wearing all of their "extreme" gear -- which in Kate Beckinsale's case, included a stylish fur-lined hat. And while they weren't moving like martial artists in the climactic scene, they were moving a lot more effectively than most mountain guides.