Book Review: The Steady Climb - A Family Journey from Mountains to Markets by Jay Hack

In the year 2000, I met a jovial mountain guide at the Institute. Jay Hack was an extremely cheerful individual, a great climber and an absolutely stellar guide. Jay and I became fast friends and long term climbing partners.

I was living in Las Vegas at the time, and Jay would regularly come and stay with me. We would climb together whenever possible. And Jay would pick-up guide work whenever he could. Our Red Rock Canyon program was nowhere near as robust as it is now, and at the time it wasn't able to support multiple guides simultaneously.

Jay was a one of those guides who lived out of his car and followed the climbing and guiding seasons around he world. He worked in the desert, in the Cascades, in Alaska, and in South America. And for a time this lifestyle worked for him.

But then, it didn't.

He became restless and wanted a change. He decided to attend graduate school at American University in Washington D.C. It was there that he pursued and MBA.

There's an old joke about guides that goes something like this:

What's the difference between a mountain guide and a mutual fund?


A mutual fund will eventually mature and make money...


Jay, like a mutual fund, did eventually mature and make money. But alas, he did not only make money, but he became a financial consultant and now helps other people make money.

I, on the other hand, remain a mountain guide... Poor and immature.

But enough about me. 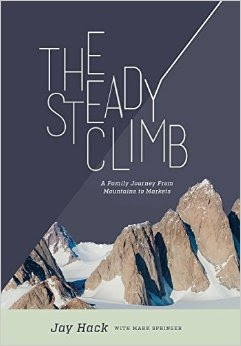 In that setting, working alongside his father, Jay learned a tremendous amount about investing and the way that markets work. And there he developed an understanding of how his career as a mountain guide could help him in his career as a financial advisor. He realized that he was, after all, still a guide.

Mountains are metaphors for innumerable things that people experience. But the mountain as a metaphor is almost uniquely suited to the concept of investing. There are ups and downs, dangerous moments, moments of triumph and even moments of sheer terror. This is a perfect analogy for many peoples experiences with investing.

Jay has written a book about his experience applying the lessons that he learned as a climber and guide to his career as a financial advisor. The Steady Climb: A Family Journey from Mountains to Markets explores important tenants of investing and money management. He discusses a number of critical financial concepts, the bulk of which revolve around the notion of making long term solid conservative investments instead of short-term gambling on the market.

The Steady Climb provides an accessible way for someone who is not financially minded to look at investment strategies. The book uses a series of anecdotes from Jay's life as a guide, his father's work in financial consulting, and in his own work as a financial advisor to illuminate core concepts. This narrative style slices through the standard blah that accompanies other such books and provides one with an engaging window into the world of investment.

I've known Jay since the turn of the century and I've heard every one of his mountain stories several times. They never get boring because he is a great storyteller and often his stories are funny. In The Steady Climb, I experienced these stories again. But this time there was something different...

We tell stories to engage our friends and make them laugh. And Jay was always successful at this. But with the way these stories were told in the book, there was a greater point. Jay took each of his stories and expertly re-fashioned them to provide insight into the complexity of financial investment. And for that, I'm grateful. I learned a tremendous amount from The Steady Climb and I would heartily recommend it to anyone, young or old, that is trying to develop a solid investment strategy.

Indeed, after reading this book and following some of Jay's advice, perhaps I will no longer be a poor guide. I don't know if Jay or his book can do anything about my maturity level though...