--A 64-year old woman was killed in an avalanche last Thursday while skiing out-of-bounds near Crystal Mountain Ski Area. It appears that Elizabeth Hampson was traveling

--USA Today is reporting that, "A massive winter storm forced officials to temporarily close Crater Lake National Park on Tuesday. Oregon's only national park was pounded with heavy snow and high winds during the past few days, resulting in the uncommon closure on Tuesday of what's often called one of the "snowiest inhabited places in North America." To read more, click here.

--It appears that a mining project that would have impacted Mazama climbing will not happen. Read more, here.

--The Los Angeles Times is reporting that, "Two backcountry skiers escaped uninjured Thursday after being caught in an avalanche that closed the state highway between Reno and Lake Tahoe in a part of the Sierra Nevada where as much as 6 feet of snow has fallen over the past four days." To read more, click here.

--The Los Angeles Times is also reporting that, "ski resort operators are looking for crowds of near record size — with price increases to match. Storms have dumped up to 7 feet of snow on some peaks in as little as 48 hours." To read more, click here. 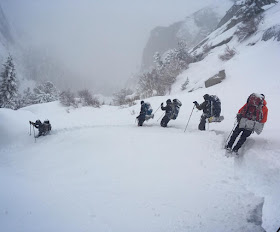 The High Sierra got hammered by snow last week. As one of our teams
descended from the Whitney region they encountered chest deep snow!
Photo by Ian McEleney

--On Friday, all non-essential employees were evacuated from Yosemite Valley amid flooding fears. To read more, click here.

--And in Mammoth, they're using a howitzer cannon to manage the avalanche hazard...

--Fox News Travel is reporting that, "Although the U.S. marked its national parks centennial in 2016, the end of celebratory free passes hasn't kept visitors from flooding into Utah's Zion National Park, some 160 miles from Salt Lake City. Park officials report that while winter is usually the slow season at Zion, the 2016-2017 winter is seeing so many travelers coming to the park that there have been traffic backups on the road leading into the site. The Associated Press reports that Zion is set to hit four million visitors in 2016 (final numbers are being tallied now), and that some cars have been exempted from the $30-per-vehicle park fee in order to speed up the queue and keep it from spilling over into the nearby town of Springdale." To read more, click here.

--ABC News is reporting that, "Authorities say one of two missing backcountry skiers who were found in the central Colorado mountains died while he was being treated for hypothermia. The Lake County Office of Emergency Management posted on its Facebook page that Brett Beasley and a boy he was skiing with were found near Turquoise Lake west of Leadville on Thursday afternoon. The boy, whose name and age have not been released, was uninjured and was taken from the area on a snowmobile to be reunited with his family. Beasley was treated for hypothermia but did not survive." To read more, click here. 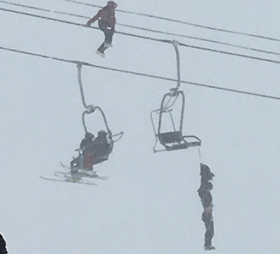 Mickey Wilson slacklining on a lift cable to save an unconscious man.
It's not clear if Mickey was wearing ski boots when he did this.

--So a guy got his backpack straps caught in a chairlift in Arapahoe Basin and got dragged back up by the neck. He went unconscious after the lift stopped. A rescue team tried to make a human pyramid to rescue him, but kept slipping. That's when Mickey Wilson sprung into action, climbed up a tower and SLACKLINED (you read that right!) across the cable to cut the victim down, saving his life. To read more, click here. To see a video of the victim being cut down, click below.

--In more Arapahoe Basin news, the resort shut down on Tuesday amid avalanche concerns at Loveland Pass. To read more, click here.

--Rock and Ice is reporting that, "Chris Snobeck, of Colorado, has made the third ascent of Saphira in Vail's Fang Amphitheater—a climb considered to be the hardest mixed route and only M15- in the United States. With his ascent, Snobeck became the second American to climb M15-. Moreover, he climbed the route twice." To read more, click here.

--The Flathead Beacon is reporting that, "A 36-year-old Kalispell man was killed Thursday in an avalanche while backcountry skiing on Stanton Mountain in Glacier National Park, officials confirmed. Authorities have not released the name of the victim pending notification of next of kin." To read more, click here.

--WCVB in Vermont is reporting that, "A longtime Killington Resort mechanic died from injuries after police say he fell over 10 feet inside a gondola terminal." To read more, click here.


--The GOP House has recently changed the rules concerning the way that federal lands are transferred, making it much easier to sell off public lands to private entities. This is a very disturbing move that could have a far reaching impact on outdoor recreationalists of all stripes. To read more, click here.

--On a related note, Peter Metcalf, the CEO of Black Diamond, wrote an editorial for the Salt Lake Tribune where he argues that it's time for the Outdoor Retailer show -- a show that brings 50 million dollars in direct spending -- to leave Utah. "Over the past several months Utah's political leadership has unleashed an all-out assault against Utah's protected public lands and Utah's newest monument. It's time for Outdoor Retailer to leave the state in disgust." To read more, click here.

--We often forget how important ski patrollers are in keeping us safe when we ski in-bounds. They manage avalanche hazard, patrol for dangerous skiers and boarders, set boundaries to keep people out of dangerous areas and provide first aid. In Montana last week, Big Sky Patrollers were responsible for bringing a snowboarder back from the dead, before a life flight crew took over... To read about it, click here.

--And finally, some yahoo free soloed a route in North Carolina completely naked. To read more, click here.
Jason Martin at 6:00 AM