--Former AAI Guides Kurt Hicks and Mark Allen made the first ascent of Crater Creek Falls (WI4+, III) on Mt. Si. This is possibly the closest ice climbing to the Seattle metropolitan area. However, it's seldom cold low enough, long enough for something like this to form. To read more and to see a route description, click here.

--Some Squamish climbers sent a variation to the Ultimate Everything (5.10b, IV) last week all on ice... To read about it, click here.

--Speaking of Squamish, access at the popular climbing area may be under threat due to a lack of parking. To read more, click here.

--Unofficial Networks reported last week that, "Mount Shasta, California, home of the world record for a single dump (189 inches in February 1959) is getting pounded by a storm of biblical proportions. NOAA is predicting as much as 18 feet of snow could fall on Mt. Shasta over 4 days and as much as 22 feet in a 7 day timeframe. Here is a day-by-day breakdown from the National Weather Service." To read more, click here.

--Gripped is reporting on Fred Becky's 94th birthday. "Fred Beckey is one of the world’s most accomplished climbers and turned 94 on Jan. 14, 2017. Born on Jan. 14, 1923, Friedrich Wolfgang Beckey has established new routes all around the world, authored a number of best sellers and continues to get out into the mountains." To read more, click here.

--It appears that the Forest Service is considering some kind of system to limit backcountry use in Oregon's Three Sisters Wilderness. To read more, click here.

--Arizona's 3 TV News is reporting that, "a difficult rescue ended Sunday when crews managed to reach an injured mountain climber stranded in steep, rugged terrain west of Sedona. It took more than three hours to reach the man who was incapacitated in the area of the Capitol Butte and Thunder Mountain trails in the Coconino National Forest." To read more, click here.

--The Las Vegas Review-Journal is reporting that, "A local environmental nonprofit is invoking Nevada’s anti-SLAPP law in an attempt to dismissal lawsuit filed last month by Clark County, according to a court motion filed Monday. Save Red Rock attorney Justin Jones said the lawsuit, filed in Clark County District Court, could bar the nonprofit from testifying at County Commission meetings against a plan to build about 5,000 homes atop Blue Diamond Hill, located near the Red Rock Canyon National Conservation Area." To read more, click here. 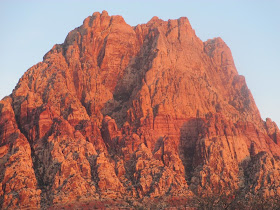 --Climbing magazine has published an article that explains all the ins and outs of the housing development issue. To read the article, click here.

--It's amazing how fast a climber squabble can blow up online. A pro boulderer (Courtney Sanders)  posted a photo of her climbing after a rainstorm on sandstone in Red Rock Canyon on Instagram. This is a questionable activity given the fragility of sandstone and the local ethics. She was called out on her activity and then her husband -- also a pro boulderer named Daniel Woods -- got involved, and things went downhill from there. There was a full-on flame war and even threats of violence. Much of the material online was deleted, but the original poster eventually apologized. Daniel Woods also made an attempt to apologize, but did it in an extremely passive aggressive way. His "Sorry, Not Sorry" apology is still burning up Red Rock locals Facebook pages. To read an article about this skirmish, click here. There's also a conversation about this incident, here.

--A skier in Breckenridge died of a skull fracture after skiing into a tree. To read more, click here.

--A backcountry skier was swept down a slope and over a 25-foot cliff near Silverton this week. The skier was buried under four-feet of snow. Thankfully, an avalanche educator happened upon the scene and rescued the skier. To read more, click here.

--A Mountain Rescue team member was swept away in an avalanche last week and seriously injured. To read more, click here.

--The Denver Post is reporting on the statistics behind US in-bounds skier fatalities. "The average person who died on the slopes of U.S. ski resorts during the 2015/2016 season was a 30-something experienced male skier wearing a helmet who hit a tree going too fast on an intermediate run, according to the National Ski Area Association’s annual report on safety." To read more, click here.

--The Denver 7 Channel's Crime Stoppers Unit is offering a reward for information concerning a snowboarder who hit a woman and shattered her leg and then left. It is completely inappropriate to be blasting down a run, barely in control, while ripping past other skiers and boarders. To see more about this, click on the video below:

--The Vail Daily is reporting that, "Two snowboarders were rescued late Wednesday night after becoming buried and seriously injured in an avalanche on a backcountry slope near the Smith and Morehouse Reservoir in the Uinta-Wasatch-Cache National Forest." To read more, click here.

--Twin Cities Pioneer Press is reporting that, " Minnesota climber and adventurer Lonnie Dupre narrowly escaped disaster during his attempt this past week to solo-climb Alaska’s Mount Hunter. Dupre, 55, of Grand Marais broke through a crevasse on his retreat from the 14,573-foot mountain and hung by a single ice axe for several minutes with his feet dangling beneath him, he said." To read more, click here.


--The HuffingtonPost is reporting that, "Patagonia last year spent $1 million on a get-out-the-vote campaign, completely shut down its operations on Election Day and donated all $10 million it earned on Black Friday to environmental causes. Now, the high-end outdoor apparel retailer is gearing up to battle Utah officials’ plan to roll back President Barack Obama’s designation of a new national monument in the state. The company this week threatened to pull out of Salt Lake City’s biannual Outdoor Retailer Show, a trade show that brings in 45,000 visitors spending more than $40 million each year." To read more, click here.

--Yvon Chouinard has written an editorial at the Patagoinia blog, The Cleanest Line about Patagonia, the outdoor industry and Utah. " The outdoor industry creates three times the amount of jobs than the fossil fuels industry, yet the Governor has spent most of his time in office trying to rip taxpayer-owned lands out from under us and hand them over to drilling and mining companies. And just a few days ago, the state announced plans to sue the federal government to reverse the recent protection of Bears Ears, a site containing thousands of years of Native American archeological treasures and craggy red rocks beloved by climbers from all over the world. Politicians in the state don’t seem to get that the outdoor industry—and their own state economy—depend on access to public lands for recreation." To read the complete editorial, click here.

--The Access Fund is reporting that, "The Red River Gorge Climbers’ Coalition (RRGCC) and Access Fund, with assistance from Trango Climbing Gear, are thrilled to announce the purchase of the Bald Rock Recreational Preserve in the Red River Gorge of Kentucky. This acquisition secures access to a popular set of world-renowned climbing areas—including the Motherlode, the Chocolate Factory, the Bear’s Den, and the Unlode. The 102-acre acquisition secures access to these areas for climbing and land conservation." To read more, click here.

--The Access Fund is also reporting that, "Rumney Climber’s Association (RCA) and Access Fund are excited to announce that we have completed the second phase of protecting Rumney’s Northwest Crags (aka the Final Frontier). In just under a year, the climbing community rallied to raise over $100,000, and RCA now owns the 85-acre property. Access Fund provided RCA with two loans to cover the gap in the purchase price, which RCA will pay back after they transfer the property to White Mountain National Forest." To read more, click here.


--We usually don't post bouldering videos, but how often do you get to see Khal Drogo climbing with Chris Sharma. Khal Drogo (or at least Jason Momoa, the actor who plays him) seems to have been reborn after his death in Game of Thrones to be a pretty good climber...

--Senator Lisa Murkowski (R - Alaska) mentioned climbing access in her opening statement in the Ryan Zinke confirmation hearing in Washington DC. Zinke is being considered for the position of Secretary of the Interior. To see the clip, click here.
Jason Martin at 6:00 AM