Climbing and Outdoor News from Here and Abroad - 2/2/17

--It appears that a 55-year old skier died at Stevens Pass Ski Resort last week. It's not currently clear if it was due to trauma or a medical reason. To read more, click here.

--A very cool new alpine ice line went up on Mt. Hood this week. The Pencil is a thin WI 3 line at the on the Elliot Glacier. To read more, click here.

--There is a bit more information about the death of a Squaw Valley Ski Patroler death last week. It appears that an avalanche charge detonated prematurely. To read more, click here.

--Two people were injured by an avalanche on Mt. Baldy this week. To read more, click here.

--The Desert Trail is reporting on an accident in Joshua Tree National Park. "A Burbank man was airlifted out of the park Sunday, Jan. 29, after taking a 30-foot fall. Colin Campbell, 26, was rock climbing in the Jumbo Rocks at about 11 a.m. area when he fellow about 30 feet to the ground. He was flown to Desert Regional Medical Center in Palm Springs for treatment." To read more, click here. 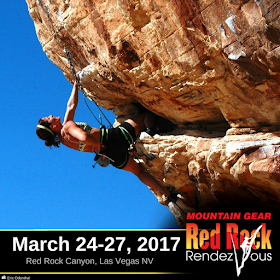 --Red Rock Rendezvous is a world-class climbing event. There will be climbing instruction, competitions, slideshows, games and parties. This is one event that just gets better every year. AAI guides will be there to support the event and will be available for guided climbs or instructional programs both before and after the Red Rock Rendezvous. To learn more, click here.

--Teluride Helitrax, a Colorado heli-ski operation, set off a charge on Ajax Peak above Telluride and... Well, there was an avalanche. A big one. Check it out below:

--A snowmobile rider was killed in an avalanche near Cooper Landing, Alaska this weekend. To read more, click here.

--It appears that there was an accident on Katterskill Falls in New York State, but information is still scarce. To read more, click here.

--The Men's Journal is reporting that, "Widespread hiring freezes hit most federal agencies on Monday (excepting the military). The stated goal of the order is to "reduce the size of the Federal Government's workforce through attrition." In other words? It may be here to stay. For the Department of Interior, which oversees most public lands, this likely means there will be no new employees to aid in the $12.5 billion maintenance backlog that Ryan Zinke said he'd make a priority when he took control. And while National Parks have never been more popular (with some 300 million visitors in 2015), resources allocated for conservation and land management are at record lows — meaning the new hiring freeze could have the unintended consequences when it comes to camping and hiking, mountain-biking, and paddling on public lands. Even hunting and fishing may be affected." To read more, click here.

--In the ongoing kerfuffle over the crowd size at Donald Trump's inauguration, the Washington Post reported that, "On the morning after Donald Trump’s inauguration, acting National Park Service director Michael T. Reynolds received an extraordinary summons: The new president wanted to talk to him. In a Saturday phone call, Trump personally ordered Reynolds to produce additional photographs of the previous day’s crowds on the Mall, according to three individuals who have knowledge of the conversation. The president believed that the photos might prove that the media had lied in reporting that attendance had been no better than average. Trump also expressed anger over a retweet sent from the agency’s account, in which side-by-side photographs showed far fewer people at his swearing-in than had shown up to see Barack Obama’s inauguration in 2009." To read more, click here.

--After gag orders were placed on the NPS, Timothy Egan from the New York Times wrote, "Heroes in uniform? No, not by normal standards in normal times. Informing people is what park rangers do. Anyone who has ever listened to a narrative of what happened on the bloodiest single day in American history at Antietam National Battlefield, or heard an explanation for the geysers at Yellowstone, can appreciate the professional knowledge. But in the Trump era, snippets of useful information from dedicated public employees are more like the signals that a survivor’s beacon sends out after being buried by an avalanche. In this case, the beeps represent science, history, facts. Trump is delusional in his obsession with his numbers, with his size. He has to be the biggest, the greatest, the best — all facts to the contrary. Everything he touches is phenomenal, and his opponents are garbage. But does a pathological liar really want to pick a fight with the caretakers of America’s Best Idea?" To read the whole article, click here.

--In more political NPS news the House has moved to make it easier to drill for oil and gas in the National Parks. To read more, click here.

--And the hits just keep on coming. The Guardian is reporting on the Republican effort to sell off public land. "The new piece of legislation would direct the interior secretary to immediately sell off an area of public land the size of Connecticut. In a press release for House Bill 621, Chaffetz, a Tea Party Republican, claimed that the 3.3m acres of national land, maintained by the Bureau of Land Management (BLM), served “no purpose for taxpayers”. But many in the 10 states that would lose federal land in the bill disagree, and public land rallies in opposition are bringing together environmentalists and sportsmen across the west."

--UPDATE: In late breaking news, the Wilderness Society is reporting that, "Rep. Jason Chaffetz announced in a post on Instagram that he is withdrawing the land selloff bill. The news follows many comments and calls to Congress from our supporters and other conservationists." To read more, click here.

--The Louisiana Record is reporting that, "A customer is suing operators of a rock climbing wall, alleging their negligence led to the plaintiff suffering injuries in a fall. Rachel Scherer filed a lawsuit Jan.18 against the New Orleans Boulder Lounge, LLC, Eli Klarman and K&K Insurance Company in Orleans Parish Civil District Court, alleging negligence. According to the complaint, on Sept. 26, 2016, Scherer fell 10 feet from the wall to the ground, resulting in a compound fracture of her left humerus. She was required to undergo multiple surgeries, the suit says." To read more, click here.

--Alpinist is reporting that, "The Indian Mountaineering Foundation recently announced that it is offering reduced permit fees for 81 select mountains in the Indian Himalaya. The "promotional scheme" is for this year only." To read more, click here. 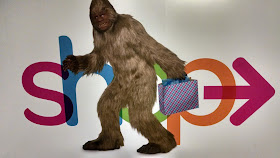 An elusive photo of Bigfoot at SeaTac International Airport.

--Apparently the big debate about Bigfoot is whether to kill one or not. And apparently there's a TV show where they hilariously debate this. Check it out, here.
Jason Martin at 6:00 AM