Your compass is pointing in the wrong direction. You know it's not north. Indeed, it's nowhere near north.

So what's up? Is it broken? Defective? What?

The problem is that it's not pointing at "true north." Instead, it's pointing at "magnetic north." Most people don't realize that there are two North Poles, the real one and the fake one, the true one and the magnetic one.

The Compass Dude puts it a bit more succinctly:

Why are there two different poles? Good question!


There are actually many different sources of magnetic activity around and in the world. All those influencing factors combine to create the north and south attractions at each spot on the globe. The actual strength and direction of 'north' is slightly different everywhere, but it is generally towards the 'top' of the planet.


The difference between true north and magnetic north is referred to as the declination. If you are not aware of the declination in a given area, then you may not be able to locate true north. 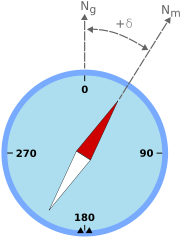 Example of magnetic declination showing a compass needle
with a "positive" (or "easterly") variation from geographic north.
From Wikipedia
Modern compasses are designed in such a way that the declination may be set. If you adjust the compass properly allowing the arrow to line up, then you will get a reading which shows both where true north is as well as magnetic north.

Most compasses require one to set the red compass point a given number of degrees off of true north. Usually there is a screw on the back of the compass that will allow you to set the declination. Two lines, often referred to as "the shed," will shift the appropriate distance off of true north. Once this is set, you will be able to shift the compass to the point where the needle is in the center of the shed. The printed "N" will then point toward true north.

Unfortunately, the declination is not always the same from one area to another. Every place on the planet has its own local irregularities and due to the fact that magnetic north isn't actually at the top of the globe, there are other variables that need to be taken into account before setting the declination. Following is a short explanation from Wikipedia on the variables:

Magnetic declination varies both from place to place, and with the passage of time. As a traveller cruises the east coast of the United States, for example, the declination varies from 20 degrees west (in Maine) to zero (in Florida), to 10 degrees east (in Texas), meaning a compass adjusted at the beginning of the journey would have a true north error of over 30 degrees if not adjusted for the changing declination.

In most areas, the spatial variation reflects the irregularities of the flows deep in the earth; in some areas, deposits of iron ore ormagnetite in the Earth's crust may contribute strongly to the declination. Similarly, secular changes to these flows result in slow changes to the field strength and direction at the same point on the Earth.

The magnetic declination in a given area will change slowly over time, possibly as much as 2-2.5 degrees every hundred years or so, depending upon how far from the magnetic poles it is. This may be insignificant to most travellers, but can be important if using magnetic bearings from old charts or metes (directions) in old deeds for locating places with any precision.


There are many ways to determine the declination. The first and most common way is to simply get it off of a USGS topo map. Unfortunately many maps are out-of-date and the declination may have changed. You may also get your declination from the web at the NOAA website, here.

Following is a short video which reviews many of the key points in this article:
To learn more about compasses and declination, the Compass Dude has a great site with a lot of valuable information.

Knowing how to use your compass well will help to keep you from getting lost... And staying found makes every trip a lot more fun!