Bolivia's Pequeno Alpamayo is one of the prettiest little peaks in the Cordillera Real. The mountain looks a great deal like Peru's Alpamayo, but doesn't have the objective danger or the size of it's namesake. Instead, Pequeno Alpamayo is a striking and accessible peak that can easily be done in a day from the Condoriri basecamp.

There are two major routes on the mountain. The moderate Southwest Ridge and the more difficult Southeast Face. Both lines require four to five pitches of climbing. The Southwest Ridge is primarily forty to fifty degree snow and ice climbing, while the Southeast Face is a bit steeper with terrain that ranges from sixty to seventy degrees.

In 1990, an AAI team established the steeper of the two routes. During the 80s and 90s American Alpine Institute expeditions were responsible for dozens of new routes in the Cordillera Real.

The route selection on Pequeno Alpamayo often takes place based on how one feels. The mountain's summit rises to 17,618 feet above sea level, so the oxygen is a bit thin. Many who might see the Southeast Face as a quick jog will find it to be somewhat more difficult due to the altitude. Climbing steep terrain at 17,000 feet often requires one to take a bit more time on each pitch. This is primarily because climbers tend to take a few breaths between each tool placement.

Both routes are accessed by traversing an adjacent peak. Tarija is 16,601 feet and is often considered an objective in and of itself. This approach to the mountain provides for an excellent view of the potential routes. Many of the striking photos of Pequeno Alpamayo have been taken from Tarija's summit.

Following is a photo essay from a series of ascents of Pequeno Alpamayo: 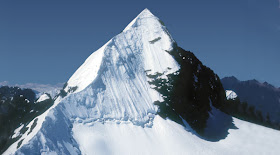 The classic shot taken from the summit of Tarija.
The Southwest Ridge climbs the obvious ridge.
The Southeast face ascends the steeper terrain to the left of the rocks.
Photo by Miles Newby 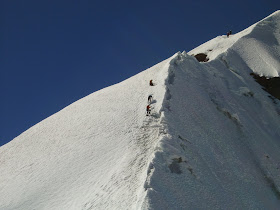 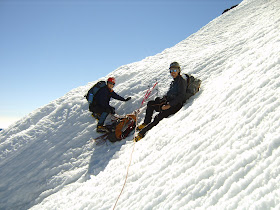 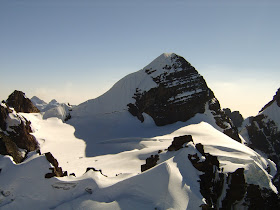 To learn more about the American Alpine Institute's expeditions to Bolivia, click here.