--Five climbers were killed over the weekend in British Columbia when a cornice collapsed. A sixth climber survived. The group fell over 1500-feet down the side of Mount Harvey. To read more, click here.

--A 36-year old skier was killed in an avalanche at Red Mountain near Snoqualmie Pass this week. Morgan Miller was a guide and avalanche educator. He To read more, click here. 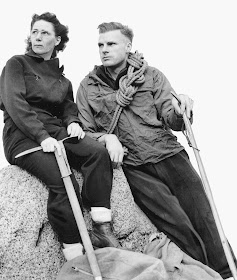 Mary Anderson and her husband Lloyd

--The Washington Post, as well as a number of other new sources, is reporting that, "Mary Anderson, a climbing enthusiast who helped start the outdoor retailer REI that has become the nation’s largest consumer-owned retail cooperative, died March 27. She was 107. Her death was confirmed by REI and reported by the Seattle Times. No other details were immediately available. Mrs. Anderson and her husband, Lloyd, along with 21 mountaineering friends, started the consumer cooperative in 1938 out of a desire to find high-quality, affordable climbing gear in the United States. By forming a co-op, they were able to buy outdoor gear in bulk from Europe and other places." To read more, click here.

--This weekend there are two access fund events with the American alpine Institute:

Saturday, April 15 - Dallas Kloke Memorial Work Day at Mt Erie: Join in on trail work, trash clean-up and invasive species removal at one of the state's most scenic crags. Big thanks to Anacortes Park and Recreation, the Mt. Erie Climbing Committee, Solid Rock Climbers for Christ and American Alpine Institute or teaming up year after year! Click HERE for more info.


Sunday, April 16 - Larrabee Climber Gathering & Clean-up: Meet at the Larrabee State Park Boat Launch at 9:00am for a fun day of trach pick-up, graffiti removal, and tour some of park's sandstone blocks. WCC, American Alpine Institute and American Alpine Club will have tents and info set up in the morning with small crews going out to pick-up trash and remove graffiti along the Boat Launch Road and beach boulders. More details can be found HERE. 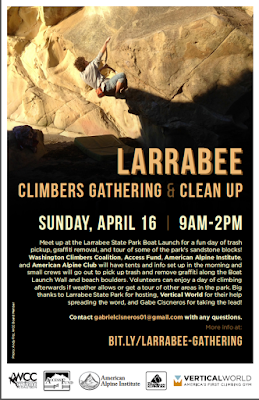 --The American Alpine Institute will be working with the Liz Rocks campaign to provide a scholarship for our Leaders of Tomorrow program for youth who come from a diverse background or who face significant hardship. TheLeaders of Tomorrow program is the American Alpine Institute's premiere program for young people who wish to become climbers and mountaineers between the ages of 14 and 17. To learn more, click here.

--Alpinist is reporting on the future of public lands. "April is likely to be a pivotal month for looming questions about the future of Bears Ears National Monument. The monument includes world-class climbing areas such as Indian Creek, and its fate will be indicative of how national parks and monuments might fare in the future. For those who are in favor of the new monument, there is good news and bad news. Bears Ears, Grand Staircase-Escalante and other national monuments appear to be secure for the time being in spite of Utah lawmakers' efforts to have President Donald Trump rescind or reduce them—which is not to say rescission can't happen; only that the law currently protects these designations. An outpouring of letters and phone calls to government representatives appears to be making a difference as well, according to the Access Fund." To read more, click here. 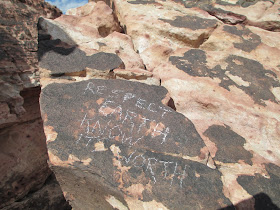 The irony is that this person scratched, "respect the Earth,
know it's worth" into the rock.

--Las Vegas 3 News is reporting on the ever-present battle against graffiti in Red Rock Canyon. To read more, click here.

--News Channel 13 is reporting that, "A 31-year-old died while climbing Mt. Princeton on Monday. Matthew Wayne Lackey, 31, from Boulder, Colo. died from his injuries after falling around 40 feet and then tumbling an additional 100 feet down the side of Mt. Princeton." To read more, click here.

--Westworld is reporting that, "Logan Goodwin, a twelve-year-old from Hermosa Beach, California, died from injuries sustained while skiing at Breckenridge resort on Saturday, April 8. He is the fifth skier to die at Breckenridge during the 2016-2017 ski season and the thirteenth person to perish at a Colorado ski resort during that span. The tragedy makes this season the deadliest in five years." To read more, click here.

--The Associated Press is reporting that, "Federal authorities are looking at Vail Mountain's proposal to add 42 acres of skiable terrain for a training and competition area. The Vail Daily reports that the U.S. Forest Service held a public meeting on the proposal last week. About 60 people attended, most of them in favor of the proposal." To read more, click here.

--And in other ski news, the Denver Post is reporting on the consequences of a new 1.5 billion dollar acquisition in the resort industry. "And suddenly Colorado is ground-zero for what will become the most hawkish rivalry in the U.S. ski resort industry, with Aspen Skiing – KSL vying against the world’s largest resort operator Vail Resorts in an escalating battle of consolidation. In the past year Vail Resorts has spent$1.1 billion for three-quarters of Canada’s Whistler Blackcomb ski area and $50 million for Vermont’s Stowe in an aggressive expansion plan anchored in a strategy to sell more of its wildly popular Epic Passes." To read more, click here.

--There has been a recall on several Wild Country Friends. To read more, click here.

--The Billings Gazette is reporting that, "Federal investigators say there is credible evidence of unwelcome conduct toward female workers in Yellowstone National Park. Alcohol, inappropriate contact and remarks that female employees said made them feel “uncomfortable and degraded” were revealed during a seven-month investigation into Yellowstone’s maintenance division. The report was issued Wednesday by Interior’s inspector general, who concluded that harassing workplace behavior by male employees had gone on for years because of actions or inactions of men in charge of the maintenance division." To read more, click here.

--An 85-year-old man is vying to become the oldest man to ever climb Mt. Everest. To read more, click here.
Jason Martin at 6:00 AM