--The toilet at Vantage (Frenchman Coulee) needs our help. There is a movement to build a second toilet at this heavily used climbing area. To learn more or to contribute, click here. 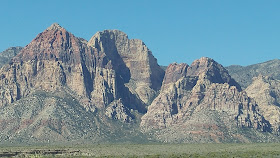 Rainbow Wall can be seen in the center of this photo.

--So Alex Honnold soloed three major routes in Red Rock in a day. He started with the Original Route on Rainbow Wall (5.12b). Then drove over to Black Velvet and sent Prince of Darkness (5.10c), and then down-climbed Dream of Wild Turkeys (5.10a). To read more, click here.

--The Huffingtonpost is reporting that, "San Francisco rescue workers made a dramatic save from the air of a man clinging to a steep cliff over the sea on Friday. The man, who officials said was homeless, hiked to a frightening height on a cliff near China Beach in the northern end of the city and apparently became paralyzed with fear. Surfers saw the hiker clinging to the sheer rock face and called 911, the San Francisco Chronicle reported." To read more, click here.


--Vox is reporting that, "It’s no secret that oil and gas companies are on the hunt for new places to drill. But the quest for more fossil fuels could heat up in places you might not expect: our national parks.With President Donald Trump’s executive order on energy, federal agencies are now reviewing all rules that inhibit domestic energy production. And that includes regulations around drilling in national parks that, if overturned, could give oil and gas companies easier access to leases on federal lands they’ve long coveted." To read more, click here.

--Outside is reporting that, "On Tuesday, the Outdoor Industry Association made a bold announcement: according to research done by the trade association, outdoor recreation now contributes $887 billion in direct consumer spending to the U.S. economy every year—$200 billion more than the industry’s initial estimate. The new report bumps up several other numbers, too, estimating that outdoor rec generates 7.6 million jobs (up from 6.1 million) and $120.2 billion in tax revenue (up from $79.6 billion)." To read more, click here.
Jason Martin at 6:00 AM