--A man was attacked by a bear in Squamish this week. It is believed that the attack was unprovoked but that the bear charged because she was protecting a cub. To read more, click here.

--The Sierra Wave is reporting that, "At noon Tuesday Dongying “Cindy” Qiu was located deceased at the base of a frozen waterfall near Outpost Camp. It is believed that she fell approximately 60 feet through a snow chute at the top of the waterfall (located on the southwest side of Outpost Camp, about a quarter mile off trail)." To read more, click here.

--The Access Fund plans to work with the BLM to do a complete inventory of all the trails in Red Rock Canyon National Conservation Area. To read more, click here.

--It is quite likely that the Outdoor Retailer show is going to move to Denver. To read more, click here.

The Aspen Times is reporting that, "Aspen Skiing Co., the Department of Veterans Affairs and Disabled American Veterans are among the five parties a Snowmass Village man has assigned blame to for a skiing collision that has put him on the defense in Denver federal court. Michael Sura is being sued for negligent skiing by Santa Fe, New Mexico, resident Stuart Pendleton. Pendleton's civil complaint was filed in the U.S. District Court of Denver in December. It accuses Sura of skiing negligently when he collided with Pendleton on the Mick's Gully run at Snowmass ski area April 7, 2016." To read more, click here. 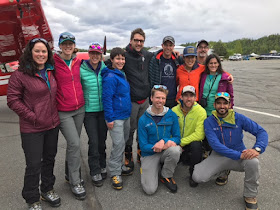 --Early this week, there were several reports stating that the Hillary Step on Mt. Everest had collapsed. That no longer appears to be the case. It's just covered in snow. To read more, click here.

--I'm not sure how I feel about the Go Pro awards. They do seem to feature a lot of people who made mistakes and got in over their heads. The following video is of a guy who wipes out on a glacier in the Alps, slides down the slope, falls in a crevasse and then later gets rescued. Pretty epic really...

--Many news sources have been saying that a climber was nearly killed by a major rockfall event in Spain as seen in the following video. What they don't say is that the climber appears to be cleaning a new route and that the rockfall was instigated by a prybar. Check out the video below to see for yourself:

--Speed climber Killian Jornet has made the Everest speed record without the use of oxygen or fixed ropes. To read more, click here.

There's climbing in the new Alien film.
This shot was from Alien vs. Predator.

--So there's a sequence in the new science fiction/horror film, "Alien Covenant" where a character watches her now deceased husband free solo in the snow, somewhere...wearing shorts. It should be noted, that this is the second time a climbing sequence was used in the Alien franchise. In the first Alien vs. Predator film, the protagonist is a female mountain guide. Just saying...
Jason Martin at 6:00 AM