Book Review: Buried in the Sky

There are a lot of great stories from a lot of horrible tragedies in the Himalaya. This is one of the great ironies of mountaineering literature. The most horrific stories are the ones that lead to the most interest amongst those of us that follow this type of literature. But there is more to these stories than just tragedy. As in tales of war or natural disaster, there tend to be people who show great compassion and courage, even when their lives are on the line. And for many readers this is the true value of mountain literature.

At least most books hadn't told that story... Until now.

Buried in the Sky: The Extraordinary Story of the Sherpa Climbers on K2's Deadliest Day, written by Peter Zuckerman and Amanda Padoan is one of the very few pieces of writing that explores Sherpa culture and those factors that bring Sherpa climbers into the Death Zone. It is an extraordinary piece of investigative writing that provides a glimpse of the economic and cultural factors that lead Sherpas to work for foreign expeditions while examining the worst disaster in K2's climbing history. 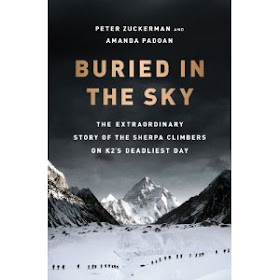 In 2008, the news trickled out of Nepal slowly. There had been yet another tragedy in the Himalaya that made headlines around the world; and when the dust settled 11 people were dead. The main culprit? A combination of things, but perhaps of most importance, ignoring turn-around times at altitude and the destruction of the fixed lines by serac-fall in a feature known as the Bottleneck.

The events that took place between July 31st and August 3rd, 2008 provide the perfect lens for Zuckerman and Padoan to focus our attention not on the expeditions from a variety of different countries on the mountain, but instead on the Nepali and Pakistani climbers who assisted the international expeditions. And indeed, not just on their culture, but also on their hopes, dreams and nightmares. For many of these people Himalayan expeditions provide good jobs with decent pay in an economically depressed area. They are happy to accept the risk inherent in climbing mountains because it puts food on the table and allows their children to go to school. For many, there is little choice.

Some high-altitude workers have been incredibly successful. They have completed numerous climbs of mountains like Everest and Cho Oyu. Success on a peak as difficult and dangerous as K2 provides them with a major status boost and can provide them with more work opportunities at a higher rate of pay.

Buried in the Sky is the first piece -- that I've read, anyway -- that explores the cultural and religious significance of the mountains to the Sherpa people.  It explores the legends and the history as the Sherpas understand it and delves into the political and ethnic divisions that define their lives.

With this cultural history underlining the narrative, the book follows the stories of a number of Sherpa and Shimshali (Pakistani) climbers.  But two of them stand out, their narratives a step beyond the rest. Pasang Lama and Chhiring Dorje were both involved in the tragedy and were also both involved in an amazing rescue.

While descending and still high on the mountain, Pasang was forced to use his ice axe to secure a fixed line into place. The anchor was weak and the axe was needed to keep it secure. There were people below on the ropes and he couldn't stomach the thought of an anchor blowing out. He thought he could rappel and follow the fixed lines down to camp, without the need of an axe. At the time he was completely unaware of the fact that the line below him had been destroyed by icefall. And so, when he reached the end of the rope, he had no means to continue down...

When the ropes through the Bottleneck disappeared, Pasang had figured it was his time to die. Stranded, he was unable to climb up or down without help. Why would anyone try to save him? A climber who attached himself to Pasang would surely fall, too. Using an ice axe to catch the weight of one mountaineer skidding down the Bottleneck is nearly impossible. Stopping two bodies presents twice the difficulty, twice the risk. A rescue would be suicidal, Pasang thought. Mountaineers are supposed to be self-sufficient. Any pragmatic person would leave him to die.


Chhiring found the axeless Sherpa and decided not to be pragmatic. Instead, he attached a line to the man and began to short-rope him through the exposed space. It didn't take long for the two climbers greatest fears to come true, the pair slipped and were not able to arrest their fall.

The pair fell hundreds of feet, but eventually came to rest. Ironically, neither of the men were seriously injured and were able to make it back to camp.

The authors indicate that had this been a "Western rescue" where one person surrendered his ice axe for the safety of many and where another helped the first to safety, such a selfless rescue story would have made it into the mountaineering history books. But because it was a pair of Sherpas, the story was barely reported.

In the aftermath of the tragedy there were a number of accusations made about the way that teams worked together and the differences between the Nepali and Pakistani climbers. As with many mountaineering triumphs and tragedies, arguments over specifics can easily degenerate into "he-said, she-said" style arguments. The truth can be difficult to come by.

The writing team for this book studied the incidents around the 2008 tragedy for two years. They made seven trips to Nepal and three trips to Pakistan, trekking to regions that are almost never visited by foreigners and obtaining unprecedented access to military and government sources. It is likely that their accounting of the tragedy is the most objective put on paper to date.  But it would be understandable if it offends some readers. It doesn't always paint the foreign climbers in the best light.

Buried in the Sky is a beautifully crafted piece and it stands out in the world of mountain literature. Many armchair mountaineers are infatuated with Mount Everest and the stories that revolve around the tallest mountain in the world.  But Mount Everest isn't the Savage Mountain. No, that name is reserved for K2, a mountain inhabited by the last of a group of bloodthirsty goddesses hunted by an ancient warrior.

The final sister -- Takar Dolsangma, the youngest, with a green face -- was a hard case. She mounted a turquoise dragon and fled northward to the land of three boarders. In modern Rolwaling folklore, this is Pakistan. Guru Rinpoche (the ancient warrior) chased after her and eventually cornered her on a glacier called the Chogo Lungma. Takar Dolsangma appeared remorseful and, spurring her dragon, ascended K2, accepting a new position as the goddess of security. Although Guru Rinpoche never doubted her sincerity, maybe he should have: Takar Dolsangma, it seems, still enjoys the taste of human flesh...