To daisy or not to daisy, that is the question:
Whether 'tis nobler in the mountains to suffer
The lightning and the wind tied in with a clove
Or to take arms against a sea of anchors
With a Daisy or a PAS...Alas a broken daisy,
To die, to sleep -- the undiscovered mountain --
From which no climber has ever returned...

Okay, I admit it, I'm not Shakespeare and even the most serious of free soloists is nowhere near as depressed as the Prince of Denmark. But I have spent a fair bit of time thinking about both Hamlet and daisy chains. I know some of you are wondering how they are connected. They're not...except in my very bad Shakespearean verse.

Daisy chains are a very tricky tool. When used correctly than can be tremendously valuable to a climber. When used incorrectly, they can be incredibly dangerous. 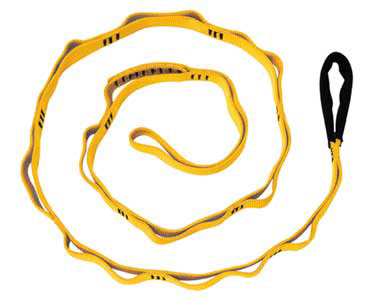 The main advantage to the use of a daisy chain is that most people leave them permanently affixed to their harnesses. As such, when they get to an anchor they can quickly and easily clip in. The use of daisy chains is especially valuable when one is trying to set-up a top-rope and needs to clip into something near the lip to remain safe or when one needs a safety attachment for a series of rappels.

It is possible for a daisy chain to fail. If you clip the end of the chain and then clip a loop, the internal loops can come apart as well, causing a catastrophic failure. There are two ways to avoid this. First, you can put a twist in the end of the daisy so that it cannot fail. Or second, it is possible to use two carabiners.

There is another alternative to the daisy chain. The PAS (Personal Anchor System) is a series of independent loops that are sewn together in a chain. Climbers who use the PAS will use it in much the same way as a daisy chain, but do not have to worry about catastrophic failure.

Most guides do not use daisy chains or the PAS. Instead, they will use their rope to tie directly into the anchor with a clove-hitch. The advantage to a clove-hitch is that it is adjustable once you are off belay. There are styles of daisy chains which allow this, but the amount of adjustment provided is minimal. With a rope, one has the ability to make major adjustments. For example, it's nice to tie into the anchor with a clove, then give yourself enough slack to go back over to the edge of the cliff, so that you can hear and be heard.

Guides often use slings in lieu of a daisy chain. The is because there is little need of a daisy in most multi-pitch environments.

Daisy chains are most useful in either a single pitch or an aid climbing environment. If you're climbing primarily in these environments, then you should definitely consider using a daisy. If you only occasionally play in these types of environments, then a couple of slings are much lighter and can be used in more applications.