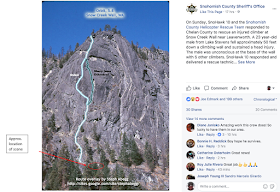 On Sunday, there was a rescue on Snow Creek Wall.
(click to enlarge)

--On Sunday, a young climber suffered an injury on Snow Creek Wall. The Snohomish County Helicopter Rescue Team was able to pluck the injured climber from the feature. To read more, click here.

--All burn bans in the North Cascades National Park Complex have been cancelled. To read more, click here.

--Squaw Valley is reporting that, "Squaw Valley Alpine Meadows has invested $4 million in its snow safety program in a continued commitment to the efficiency of mountain operations and the safety of guests and staff. New to the resort, an Astar 350 B3 helicopter will be on site for a portion of the season and four new avalaunchers will enhance avalanche control abilities." To read more, click here.

--News Channel Three is reporting that, "The discovery of two embracing bodies in Joshua Tree National Park on Sunday may finally give some answers to the families of a pair hikers who have been missing for nearly three months." To read more, click here.

--First Tracks is reporting that, "the owners of Arizona Snowbowl near Flagstaff have announced their acquisition of the 37-acre Elk Ridge Ski Area near Williams." To read more, click here.

--Quinn Brett is a climbing ranger in Rocky Mountain National Park. She recently suffered a severe fall and a spinal injury. There are significant costs for her to get home. Her brother has set up a YouCaring site to help with the costs. To donate, click here.

--A climber was killed at Red River Gorge this week and when his partner tried to rappel down to him, his hair became entangled in his gear, scalping him. This is a pretty horrible story. To read more, click here.

--NH 1 is reporting that, "a Massachusetts rock climber was rescued from a ledge in New Hampshire after falling 50 feet on Saturday. 35-year-old Keith Rehermann, of Wakefield, Mass, was 50 feet up a cliff when he fell at Woodchuck Ledge. Several pieces of gear that Rehermann had placed to stop his fall failed, and he landed at the base of the climb. His climbing partner was able to call 911 for help." To read more, click here.

--Communication is important, especially concerning whether your are going to lower or rappel. This article concerning a fatality last month reiterates how important this is...

--Andy Kirkpatrick's book, PsychoVertical is an absolutely awesome piece of writing. It's funny and terrifying all at once. You can read our review of the book, here. And now, the book has been adapted into a film that will be shown at the Banff Mountain Film Festival. Check out the trailer below:

--It should come as no surprise that this administration is bad for skiing and the ski industry. Read Outside magazine's report, here.

--And finally, here is one of those crazy nature videos. A wolf and a moose have a confrontation in the water, and it is made all that much more dramatic by intense action movie music.
Jason Martin at 6:00 AM