A plane crash in the middle of the Alaskan winter? A pack of wolves hunting down the survivor's of the crash one by one?

Somewhat ludicrous? Of course, but aren't most of the outdoor survival movies out there...? And even if it is ludicrous I know that the adventurer within you is intrigued by the premise. I certainly was.

The plot of The Grey is ludicrous. A team of oil workers are involved in a serious plane crash in the middle of a snowstorm. John Ottway, played skillfully by Liam Neeson, quickly takes charge of the survivors, leading them away from the crash site toward perceived safety.

But there's a catch.

The team is being chased by a pack of viscous wolves, wolves that seem to enjoy killing people for fun instead of for food. Wolves that don't appear to be afraid of people or fire or anything else... 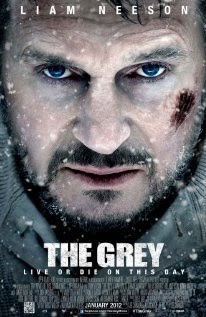 Liam Neeson likes to play the tough guy. He does a great job of this in literally dozens of films, from the likes of Taken to Rob Roy, from Clash of the Titans to The A-Team...but he has also been in a number of films where he has played softer characters like Oscar Schinder in Schindler's List, a writer in search of a soul mate in Love Actually, and Alfred Kinsey in Kinsey. So it's not a great stretch for Neeson to jump into the troubled persona of John Ottway in The Grey.

Ottway is troubled not because he is stranded deep in an Alaskan white-out with a number of foul-mouthed vagabonds, but instead because he has deep inner demons which haunt him throughout the film. And this is where the story steps away from your standard running and jumping thriller. The Alaskan winter and even the wolves are metaphors for Ottway's inner demons. As a result, the film doesn't truly fit in the action movie genre. Instead, it becomes a meditation on loss, death and letting go...

Joe Carnahan -- the film's director -- cowrote the screenplay with author Ian McKenzie Jeffers. The script is based on Jeffers' short story, The Ghost Walker. Director Joe Carnahan has been involved with a number of other action based films, such as Smokin' Aces and The A-Team. But this particular film feels different from his other efforts. There is more to the story than meets the eye. The script that Carnahan and Jeffers developed tries, sometimes successfully and sometimes unsuccessfully, to dig deeper into the human psyche and our fears about death and mortality.

From an outdoor adventurer perspective, the film leaves something to be desired. Characters make mistakes that normal outdoors people would never make. The worst of all is the moment when the team ties a bunch of clothing together in order to use as a rope to get across a chasm.  They shimmy across with little concern about the stitching or the fact that it's really hard to hang on a rope. The moment that they decide to do this, you just want to slap your hand on your forehead and ask the characters if they are trying to die...

In addition to the strange decisions that some of the characters make, there is the whole wolf hunting people thing. This is pretty unrealistic, but I'm somewhat willing to suspend my disbelief.  Though not everyone was impressed by this part of the story. Wikipedia states that there was quite a bit of controversy surrounding the opening of the film:

On 19 January 2012, British Columbia's The Province featured an article about the movie's buying four wolf carcasses from a local trapper, two for props for the movie and two wolves for the cast to eat. This angered environmentalists and animal activists, who were already irate that the movie depicts wolves in a negative light, specifically at a time when gray wolves had recently been removed from the Endangered Species Act in many western American states. In response to the portrayal of wolves in the film, groups including PETA and WildEarth Guardians started drives to boycott the film. Open Road responded by placing a fact sheet about the gray wolf on the film's official website, with cooperation from the Sierra Club. Carnahan has responded by downplaying the significance of the violent wolves portrayed in the film, instead highlighting the significance of man's interior struggle for survival.


I doubt that a film like The Grey could ever have a real impact on the wolf population or on people's perspectives on the animals. This wasn't a major blockbuster like Jaws, a film which lead to the mindless killing of sharks. And there just aren't enough wolves out there for people to really spend a lot of time thinking about whether or not they're being stalked every time they're outside...

The Grey is a film that looks like an action movie on the surface, but has a lot more to say underneath. It doesn't actually get around to saying much about loss, death and the human condition -- subjects it attempts to address, but it tries to.  And while not perfect, there's something to be said for trying...