Alex Honnold is the most famous free soloist in the world. We have seen him in some of the most precarious positions on the planet many hundreds of times in different film and photo shoots. But Alex was by no means first.

Dan Osman was the Alex Honnold of his day. Indeed, he was at the pinnacle of the sport when he died in 1998. Dano (as he was known in the climbing community) was particularly famous for his participation in the Masters of Stone movies, which were the rock climbing movies to watch at the time. They were heavy metal infused stoke films that we -- those who were climbing back then -- could never get enough of... 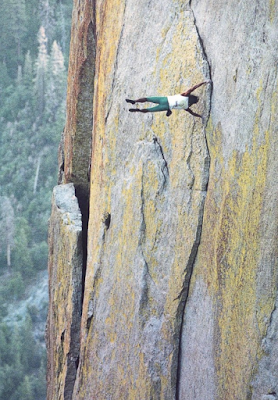 Dan Osman doing a human flag.
This photo was everywhere in the 90s.

There was one film in particular that was perhaps the most famous of all. The film featured Dano on the Bear's Reach (5.7, II) at Lover's Leap, literally flying up the route without a rope. Indeed, there is one particularly awesome moment where Dano lunges for a hold and nearly comes off, recovers and then keeps going. And there's another moment where he does a flying dyno to a hold. The movie is awesome and you can check out the film below:

Dano was a big deal in the eighties and nineties. He was the essence of the cool climber, working a few months a year, dirt bagging, doing BMX tricks and climbing wicked hard.

Tragically, Dano was killed in an accident in 1998. He was one of the few practitioners of a sport that some referred to as "rope free-flying." This was the BASE jumping of the day and was just as dangerous. In essence, a climber would jump the whole length of a dynamic rope. Sometimes practitioners would tie two or more ropes together. Dano did this and somewhere the system failed. Outside magazine put together an excellent story on this.

Alex Honnold is the Dan Osman of our day. And Alex is keenly aware of climbing's history and those who came before him. As such, he put together a tribute to Dan Osman and climbed the Bear's Reach in red shorts and a mullet wig with heavy metal raging in the background.

To be frank, the video is glorious.

Check it out below: